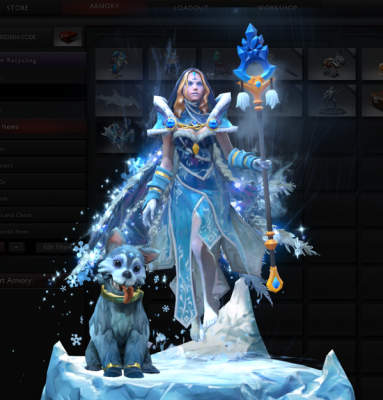 Dota 2 patches may be few and far between, but when they hit it’s like Christmas for each and every player of Valve’s MOBA/ARTS/whatever acronym you enjoy. For their second celebration of the New Bloom Festival, Dota 2’s event styled after the Chinese New Year, Valve has released a plethora of game modes, balance changes, store items and a new hero to the pool.

The main event is the Year Beast Brawl event, a change-up on Dota’s All Pick standard mode. The game will play out normally, except that every 5 minutes, each team will spawn a Year Beast of their own, which will charge down the lanes towards the opposition. Players can use accrued Ability Points, collected throughout the New Bloom Festival’s duration, to upgrade their team’s Year Beast and give it abilities to use and passives that will boost their team’s power. The victors take home an item set (a themed cosmetic set for one of 110 available heroes in Dota 2’s pool) and a trophy, while the losers receive more points in their pool to have a better chance at victory next time. The event is only available a few times a day and in ten minute windows, so players should be prepared to jump on and play at any moment. The first Brawl will occur sometime tomorrow, according to Valve.

A photo of CM’s Arcana set, courtesy of CyborgMatt.

Also released is an Arcana set for Crystal Maiden, entitled Frost Avalanche. Arcana sets are cosmetics that completely revamp a hero, from new ability animations and special effects to unique elements, like the Aurora Pup companion that will follow CM around and react to events in-game. The price tag is currently $27.99, and that will increase to $34.99 after March 2, 2015.

Winter Wyvern has also been added to the game, leaving only two heroes from the Warcraft 3 Dota All-stars left to be ported. Winter Wyvern is a support hero, a dragon who can shred her enemies with ice shards, encase allies in healing glaciers and curse her enemies to turn on their own allies. She is also voiced by Merle Dandridge, voice of Marlene from The Last of Us, Alyx Vance from the Half-Life series, and Legion Commander from Dota 2.

Also included in the update is balance patch 6.83c, which adds a lot of pathfinding fixes and bug solutions, as well as nerfing a couple heroes who are a little too powerful in the current patch, like Juggernaut, Lion and Axe.

New items have been added to the store as well, many created by the Dota community. One highlight is Dota 2’s first community-created music pack, made by reddit user Pumodi. Featuring Asian instrumentation and amazing tracks that include new tunes for laning, fighting and dying, the New Bloom Music Pack is definitely worth checking out.

The puppy’s fur gets wet when you go in the river, and he shakes off the water when you get out. This is worth any amount of my money.

If you’re a Dota player who wants to know more, you can read up at Dota 2’s New Bloom page here. And if you’re confused by the gibberish and jargon you just read and want to attempt to understand it, Dota 2 is a free-to-play game available on Steam for PC and Mac. It’s kind of an addictive drug concentrated in game form, so tread lightly or lose thousands of hours like a certain editor has.