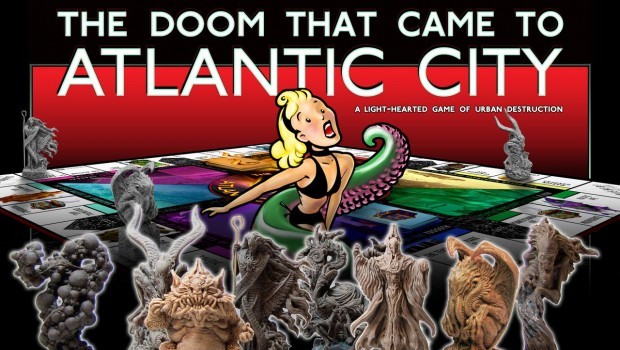 You might have heard of The Doom that came to Atlantic City, but here’s the quick version if you haven’t.  A game parodying Monopoly with figures from the universe of H.P. Lovecraft is put up on Kickstarter and earns over $120,000 on a $35,000 goal.  The creator of the Kickstarter ended up spending the funds trying to create a game company and the game never materialized.  The last post about the project can be seen here.  However, the game will still see the light (or is that darkness) of day now that Cryptozoic Entertainment is now going to publish the game.

Cryptozoic Entertainment™, a premier developer of original and licensed games, announced today that it will be publishing the board game The Doom That Came to Atlantic City, created by Lee Moyer and Keith Baker.This news comes just a week after the previous publisher announced that the Kickstarter project had been cancelled.

“For Lee and I, the worst part of this is that people who put their faith in our game have been hurt by it,” said Baker. “After the Kickstarter was cancelled, many people came forward with ideas to keep the game alive. But we didn’t want to pursue an option that would save Doom unless it would also get the game into the hands of the people who first supported it.”

They have indicated that backers of the original Kickstarter will be getting their own copy.  Considering there were almost 1250 backers, that’s a lot of games to send out.  Kudos to Cryptozoic for honoring the orders of the original backers.

Was the Doom worth saving?  It sounds like the game will be demoed at GenCon in a couple of weeks.  If you are heading there, you might want to check it out.