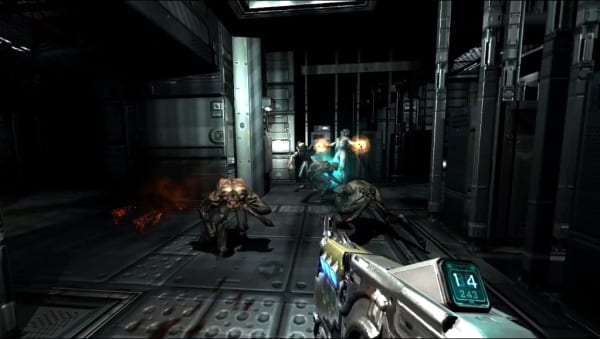 Coining the phrase “Brown is not a texture”, the boys at id have been bringing us the most incredible gaming engines on the planet.  Quake II made the original Unreal look like tinker-toys.  Quake 4 pushed machines to their limit.  Rage made video cards whimper in fear.  Well…get ready to do it all again along with some all new content, remastered in 3D!   Here’s a nibble about what is included in the title before we get to the video for “The Lost Mission”.

Return to Mars and face off against the forces of Hell. Suit up as the only surviving member of the Union Aerospace Corporation’s Bravo Team and discover the horrifying truth behind the unimaginable evil that has been unleashed across the planet. You are the last hope in a race to stop a full scale invasion from Hell.

DOOM 3 BFG Edition is the ultimate collection of groundbreaking games that defined the first person shooter. It includes DOOM, DOOM II, DOOM 3, and DOOM 3: Resurrection of Evil, as well as eight all-new terrifying levels entitled “The Lost Mission”. All DOOM 3 content has been re-mastered for Xbox 360, PlayStation 3, and PC in stunning 3D for an even more terrifying FPS experience.

Monster closets aside, I enjoyed DOOM 3 far more than other titles in the series.  It’s good to see that I’m not the only one who felt that way!  You can pick up the DOOM 3 BFG Edition when it releases on October 16th on PC, Xbox 360, and PS3.  Enjoy the video!