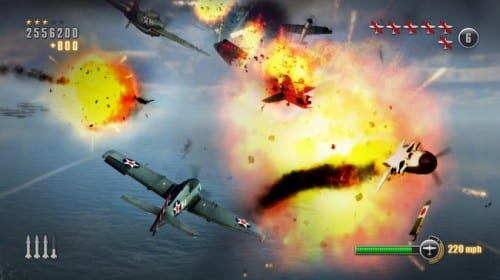 City Interactive announced today that Dogfight 1942 is now available for purchase on Steam. Aiming to bring the aerial combat genre to a new level, Dogfight 1942 combines the convenience of a digital download with the production value of a retail game. In addition to the game’s introduction to Steam, City Interactive is releasing a new DLC for Xbox Live titled ​Fire Over Africa, which takes place over the skies of Tobruk  in the famous Battle of El Alamein. Players will fly as one of the British pilots squaring off against the forces of General Rommel as they fight for the fate of Africa.

Dogfight 1942 is a fast-paced WWII air combat arcade-style game that features three unique game modes — Dogfight, Survival and Campaign — each offering an abundance of action that is engaging and exciting.  City Interactive seamlessly implemented intuitive controls in order to reduce the need for lengthy tutorials and for gamers of all levels to quickly and easily grab a remote and jump right into the game.  However, while the controls are not overly complicated, gameplay is extremely competitive so that even the most ardent flight game fan will find Dogfight 1942 challenging.

​Dogfight 1942​ and its expansion ​Fire Over Africa are available for purchase on Steam and Xbox Live respectively,  starting today.