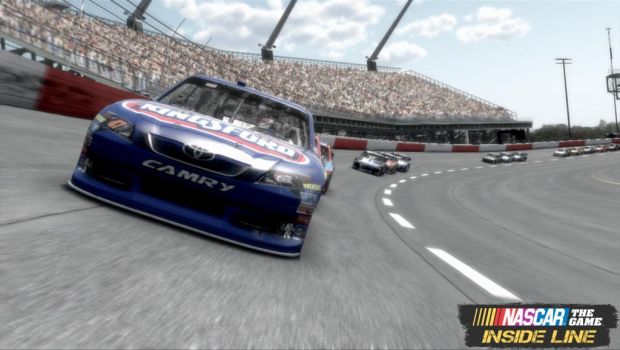 There’s only a handful of people that like NASCAR….somewhere around 75 million or so.   I’m guessing we have a few here.   Eutechnyx and Activision are taking a note from something we’ve suggested for sports titles for quite a while – weekly updates.  Obviously with something that changes as often as Pole positions and leaderboards, it’s important to stay current.  Well, Eutechnyx is doing exactly that with their title NASCAR The Game: Inside Line.   Ignoring for a fact that it’s very obvious that it’s a game and therefore completely ridiculous and unnecessary to name a game “The Game” (and we as gamers would really appreciate it if you would stop), we’ve got some some screenshots and video to show you of some of the races you’ll be able to tackle and how the DLC / Season Pass works:

Highlight: Not Breaking Brad
Type: Relive
Who: Brad Keselowski
Description: Jimmie Johnson has spun out and hit Kyle Busch. Can you keep Brad’s ride in one piece as you dodge the wrecking cars on lap 327?

Aaron’s 499 Talladega Superspeedway
Highlight: The Big One
Who: Michael McDowell
Type: Relive
Description: Drive along with McDowell and squeeze through The Big One unscathed!

After every race a new highlight pack like the one above will be released and each highlight will cost 20 Tickets.  If you don’t want to get mixed up with another currency type, you can also opt for the whole shebang at $24.99 (that’s 2000 MS points) for the full Season Pass, as well as all 2013 Gen 6 paint schemes.  I now present to you, NASCAR The Game: Inside Line: The Screenshots for The Highlights for The Game, and NASCAR The Game: Inside Line: The Video for the Highlights for The Game – The Game.    We kid because we care.  (and because we want you to stop doing that)