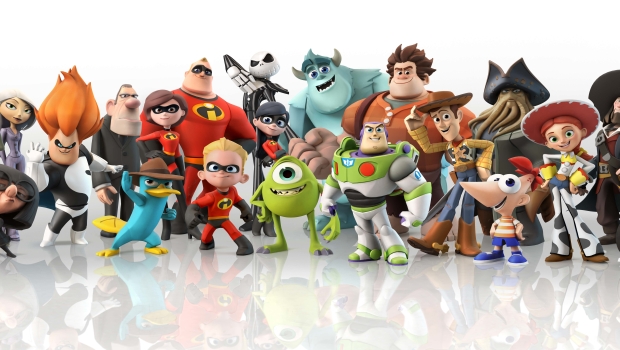 We are pretty excited about Disney Infinity – so much so that it won our Best Party Game of E3 2013.  Today we’ve got two dozen screenshots and a sweet video that shows off the Toy Box mode.  For those who missed our hands-on preview of the game, the Toy Box mode allows you to mix and match your play sets, building entire crazy worlds where Mike Wazowski can drive a Recognizer from TRON, and The Lone Ranger can race along side Mater from Cars.  Here’s a nibble from my preview:

While the Play Set mode is property-specific, the Toy Box is literally as wide as your imagination.  Any collectable you have unlocked can be accessed in the Toy Box mode, allowing you to mix and match heroes and villains from dissimilar worlds into one giant playground (you cannot take non-canon characters into a world where they don’t belong in Play Set mode, so no Mr. Incredible in Monsters University). While the unique character-specific worlds are awesome, I think it’s in the Toy Box that imagination can run wild.  This mode is a free roaming world where the player can feel free to build, customize, and explore anything they want to with any character they desire.  Want to race Lightning McQueen and Holley Shiftwell against Violet from The Incredibles driving Quora’s car from Tron: Legacy?  Care to build out the Disney castle and expand it with crazy spires that reach far into the sky?  You can create a world of your very own, and your only limitation is the characters you’ve unlocked and the world you build.

While we didn’t get to go hands-on with it quite yet, we did see a pre-cut video of the developers building worlds in the Toy Boy.  The verticality of what was shown exceeds anything you’d expect, showing Jack Sparrow jumping from the top of a castle stacked on top of a building, stacked on top of a maze, stacked on top of….well you get the idea.  Not unlike Minecraft, this building engine looks like it snaps together with what looks like a massive pallet and almost no rules.