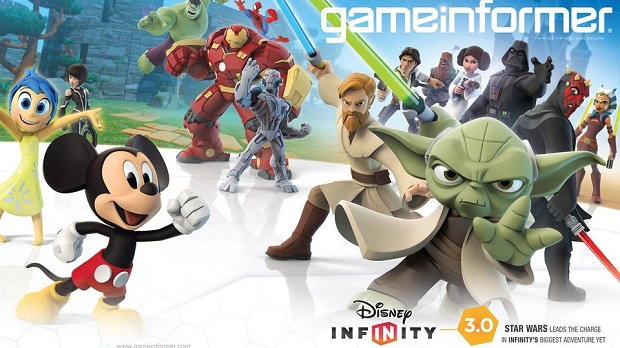 After leaks showed both Disney and Star Wars characters would be available as part of Disney Infinity 3.0, the latest in Disney’s toys-to-life series has finally been properly revealed.

Disney Infinity 3.0 is being featured on GameInformer’s June cover, where it was revealed that Avalanche Studios will once again be head of development, while recruiting outside studios to work on certain packs.

Ninja Theory will be returning to work on 3.0 after assisting with development of packs for 2.0. The studio’s pack-in playset called “Twilight of the Republic” follows Star Wars characters Anakin and Ahsoka in a story set after Star Wars: Episode II. Other Star Wars characters confirmed to come to Disney Infinity are Obi-Wan, Yoda, Darth Maul, Chewbacca, Han Solo, and Darth Vader, all of which will be available separately.

Also working on Disney Infinity 3.0 is Studio Gobo, who will be releasing a “Rise Against the Empire” pack that will basically be a highlight reel of the original Star Wars trilogy according to GameInformer.

GameInformer also reports that a pack based on the upcoming Star Wars: The Force Awakens will be available this winter. Other packs include an Avengers: Age of Ultron set, which will feature the Hulkbuster, Ultron, and more.

Disney Infinity 3.0 is coming to Android, iOS, PC, PlayStation 4, PlayStation 3, Wii U, Xbox One, and Xbox 360 this fall. The starter pack featuring Anakin and Ahsoka will run you $64.99.