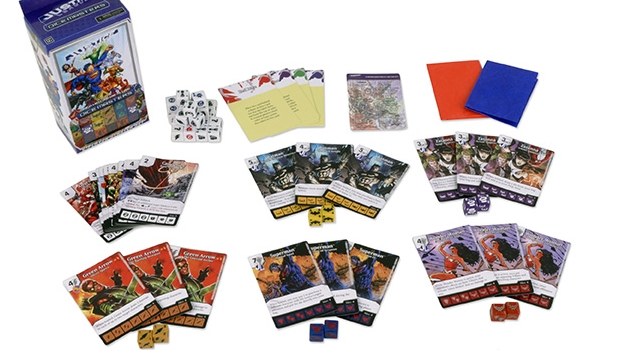 At first it seemed he DiceMasters games would focus on the Marvel properties, with Avengers and the X-Men taking center stage.  Since then, we have seen a dramatic shift in the properties being used.  Yu-Gi-Oh! got a set with Dungeons & Dragons getting one not long after.  These two were surprising to me since they weren’t traditional comic book licenses.  Now DiceMasters are heading to the comics but taking a detour through the world of DC Entertainment with Justice League.

To expand your collection, WizKids also offers DC Comics Dice Masters: Justice League foil packs, which contain two cards and two dice with additional heroes and villains. Available for $0.99 MSRP each, these make a great purchase for new and established Dice Masters players alike! The foil packs can be found in gravity feed retail displays, and there are over 30 fan favorites from a variety of Justice League heroes and villains to collect, including Batman, Wonder Woman, Superman, Zatanna, Deathstroke, The Joker, Darkseid and more!

With gameplay that supports two players in epic dice battles, DC Comics Dice Masters: Justice League will let you build your own version of the Justice League – or the Legion of Doom!

I have impressed with what I have seen of these DiceMasters sets, and for $15 you get a lot of game with them.  With the expansions being a buck each, you can really get a good collection for not a lot of cash.  With so many sets available, there’s one that probably fits your interests, and it’s worth picking it up.