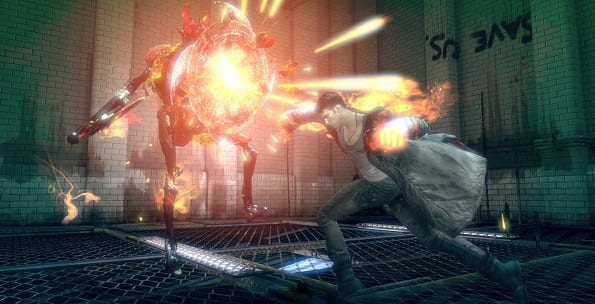 DmC: Devil May Cry is shaping up to be an interesting diversion from the established DmC cannon.  Dante returns as the protagonist of the long running hack-and-slash series but loses his characteristic red coat and snow-white hair. Never fear though, all indications suggest that the series’ frenetic action and over-the-top weapons will be returning in full force in the main game and the newly announced DLC, Vergil’s Downfall.

The DLC will not center on the series’ regular hero, though, according to Capcom’s press release:

Experience a brand new chapter of the DmC Devil May Cry adventure with Vergil’s Downfall, the untold story of Dante’s twin brother Vergil which will be downloadable* from XBLA and PSN. Vergil’s Downfall offers fans the opportunity to play as one of the most wanted Devil May Cry characters, Vergil, in an all new storyline with fresh gameplay including new weapons, combos, enemies, and locations.

My favorite part about action hack-and-slash games like DmC or Bayonetta has always been experimenting to find the craziest combos and weapons, so I’m pretty pumped about the new characters and combos.  Based on the trailer–which you’ll find below–it looks like Vergil is everything we would expect from Dante’s twin brother: white hair, a big sword, and an bad attitude.

You’ll be able to get your hands on Vergil’s Downfall shortly after Dmc: Devil May Cry goes live in January 2013.   A PC version of the content is planned, but details are still scarce. The DLC will run you 720 MS Points on XBox Live or $8.99 on PSN, though you’ll get a free code to download it if you pre-purchase your game at a Gamestop in North America.