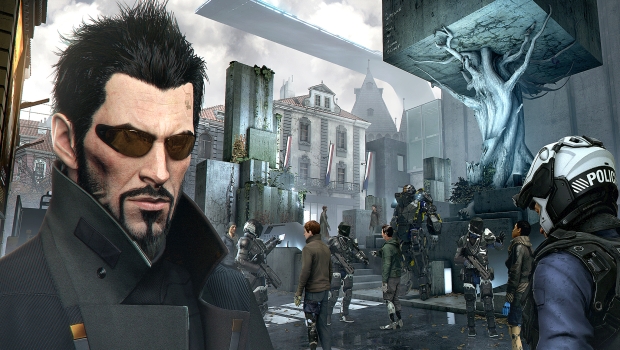 Today, Square Enix and Eidos-Montréal gave us a quick look at more of the visuals for the upcoming Deus Ex: Mankind Divided.  Showcasing how cities have evolved in the wake of the events of the end of Human Revolution.  Last chance to turn back before you hit spoilers for Deus Ex: Human Revolution.

Human Revolution’s canon ending is that, in 2027, Hugh Darrow demonstrated just how dangerous augmentation was by triggering violent psychotic delusions in all augmented individuals.  Millions of people died in the chaos that ensued, and hundreds of thousands were maimed.  Now two years later, the world has begun a segregation effort against augmented individuals.  Jammed into overcrowded and limited space, prejudice, fear, and naked persecution in the streets runs rampant.

These newest screenshots showcase a bit of the totalitarian government that has emerged around the “Aug Incident” and how life has changed in the two years since then.  It won’t be long and we’ll get to see more of the game in motion.  Deus Ex: Mankind Divided will launch on August 23rd for PlayStation 4, Xbox One, and PC.