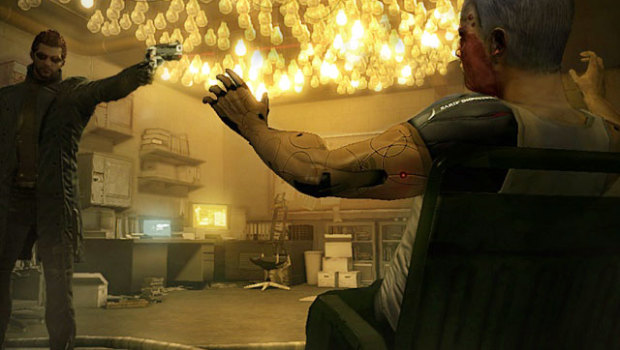 If you’re a fan of Square-Enix’s honey-coated stealth shooter Deus Ex: Human Revolution, you might want to start charging your iPad, because you’re getting more of it.  New story, new locations, and an all new “British SAS Mercenary” protagonist. Here is a nibble from our hands-on preview of the game:

A follow-up to the Deus Ex novel Icarus Effect, The Fall follows augmented British SAS merc Ben Saxon and his descent into the universe of Human Revolution. The Fall plays largely the same as it does on the console. You’ll take cover behind objects, sneak around various facilities, and stealth kill baddies. And when everything goes belly up, you’ll engage in firefights just like the console game. You’ll gain experience, augment your skills, and engage in dynamic conversation systems — this is, for better or worse, the console experience right in the palm of your hands, and it looks gorgeous.

Launching July 11, 2013 (that’s this Thursday), Deus Ex:The Fall will run you about $7. To be honest, I’m a bit disappointed in the high system requirements, will only run on devices newer than an iPad 2, iPhone 4S, and an iPod touch 5–no Falling for me.