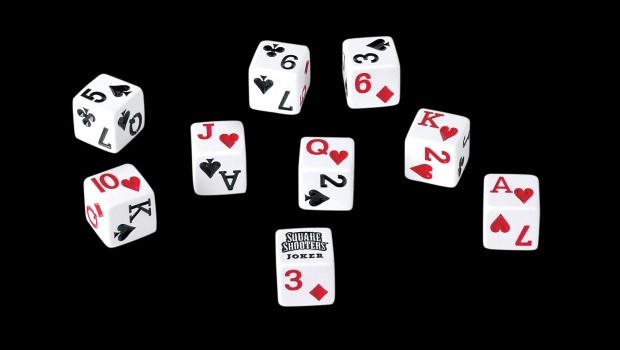 A lot of us who play games sometimes think about making games, but often times we don’t take the step to make the game or come up with an idea that sounds original.  However, if you think you can take some dice with cards on their faces and create a game out of it, then Heartland Consumer Products has the contest for you.

Heartland Consumer Products, LLC, maker of the Square Shooters dice, invites players and aspiring game designers to make new games featuring these amazing dice and enter its That’s How I Roll!® game design contest. Free to enter, Heartland promises a $2,000 cash prize for the winner! In conjunction with co-sponsor, Game Salute, LLC, the winning game will be published as a new product.

Introduced in 2011, Square Shooters was launched as the world’s first deck of cards on dice. The product has already sold nearly 250,000 copies to action-loving players of all ages. The patented Square Shooters dice, which contain all 52 playing card faces and 2 jokers, are specially arranged combinations so players can “roll” all of the playing card goals for games like poker and rummy.

Heartland’s That’s How I Roll Contest runs from October 1 – 25, 2013. Heartland has established an independent panel of 16 judges to objectively judge the contest. More information can be found at www.ThatsHowIRollDice.com.

Here’s a chance to win some cash and have your very own game printed.  You have three more weeks, so get those gears turning and maybe you can show that your game design is worthy of being on store shelves.