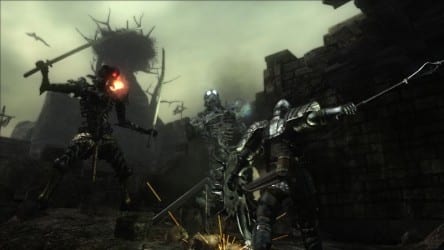 After being online for two and a half years, the Demon’s Souls North American servers will go offline at the end of this May. Players who have never tried the popular yet difficult RPG and old fans who would like one more go at the game both have only a few short weeks to get in some play time. Demon’s Souls, a PS3 exclusive released in 2009, was voted GameSpot’s 2009 Game of the Year and led to the release of Dark Souls, its also popular and challenging successor. The servers are set to go offline at the end of the day on May 31, 2012, and their closing will mark a bittersweet moment for the developers and fans of the game.

“It has been a tremendous honor and privilege for all of our staff at ATLUS to have been involved with so innovative and groundbreaking an interactive entertainment experience.  We poured our heart and soul into every facet of our involvement with Demon’s Souls, particularly the title’s memorable Deluxe Edition, which served as the only avenue through which to purchase the game’s official strategy guide.  It was also of the utmost importance for us to sustain the game’s online experience as long as possible, even beyond the point at which sales could help to offset the expense.  Regrettably, the online servers cannot be sustained forever and now the end draws near.  Thank you to the unparalleled passion and support of the Demon’s Souls community throughout these last two and a half years.  The online adventure may end soon, but the memory of it-just like that of every boss strategy, every level floor plan, and hidden secret-lives on in the gamers for whom the game was so special.  Long live Boletaria!”

To ensure that Demon’s Souls goes out in style, the game’s world tendency will be altered twice for the month of May. The shifts, set to occur on May 1st and May 16th, will both be determined by the votes of the ATLUS Faithful mailing list. The publishers have also invited all fans of the game to sign in on May 31st and give a final farewell to the game before it goes offline forever.