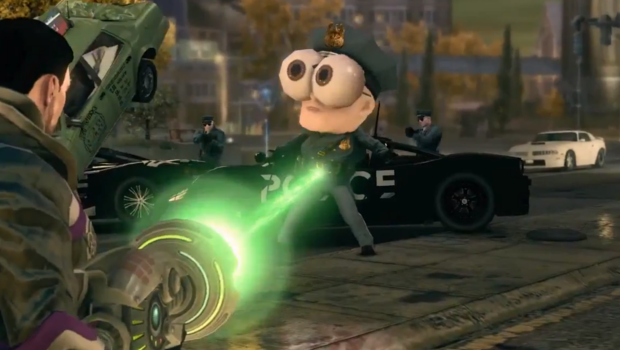 Thinking about picking up Saints Row 4? Maybe? Still on the fence? Well, Deep Silver is doing its best to entice consumers to lay down their dollars early for their latest and greatest IP acquisition. The company has announced that those who pre-order Saints Row 4 will be entitled to some additional in-game toys in exchange for their pre-emptive loyalty. The “Commander in Chief” upgrade comes free with all game pre-orders, packing in a patriotic-themed mix – an Uncle Sam outfit, a Screaming Eagle weapon that fires rockets out of its talons, and ” a stimulus package, “‘Merica”, full of incredibly astonishing firepower: flamethrowers, ultra-powered dub step guns and rocket launchers are yours for the taking.” How many of you got hooked at the dub step guns?

To round out this news, here’s a clip from the press release itself:

All hail POTUS as Deep Silver announces today that the Commander in Chief Edition for the upcoming Saints Row IV™ is available as a free upgrade to pre-orders at major freedom-retailers across North America. In this ball-busting, open-world and-other-PR-words installment in the Saints Row franchise, developer Volition continues the story of the Third Street Saints by elevating their status to the highest level – the leaders of the free world.
But the leaders of the free world are under attack from an alien invasion in the land of the free, and it’s up to you and your gang to save the world, Saints-style. To help you combat the alien terrorists you will encounter, the Commander in Chief Edition is a free upgrade for all pre-orders at participating retailers and comes fully loaded with a Screaming Eagle that fires rockets out of its talons and can invoke the “Sonic Scream” attack, leaving your enemies dazed, confused and likely scarred for life.
Additionally, if you’re going to save the world you should look good while doing it, which is why the Commander in Chief gives you a limited-edition Uncle Sam uniform, made in the US of good ‘ol A (apple pie not included.) And since you need the best [read: most ridiculously overpowered weapons ever conceived] fighting tools available, Volition and Deep Silver are giving you a stimulus package, “‘Merica”, full of incredibly astonishing firepower: flamethrowers, ultra-powered dub step guns and rocket launchers are yours for the taking. Crown thy good with brotherhood, indeed.