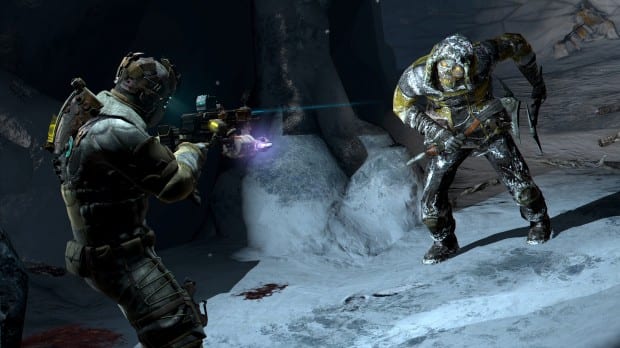 Leave it to EA to wake us out of our holiday leftover-induced stupor with this nice little piece of news. Starting on January 22nd, Xbox 360 and PlayStation 3 gamers can try their hand against the latest swarm of necromorphs in a demo for EA’s upcoming co-op action thriller Dead Space 3. Curious Xbox 360 owners can download the demo a week earlier, however, by accessing a website and following the onscreen instructions. Here are some details of what players will experience in the upcoming demo:

In the demo, players will be thrust into deep space terror when unwilling hero – Isaac Clarke – and all-new co-op companion – Sergeant John Carver – crash land on Tau Volantis, an unforgiving ice planet teeming with Necromorphs. Dead Space 3 takes the franchise’s core elements of suspense, horror, action and sound and introduces them to all-new elements – including co-op play – that allows players to work together to take down the most ambitious Dead Space experience yet.

As a fan of the first two Dead Space game, I’m curious to see what they’ve done with co-op, and whether that hurts or even helps the overall tension and horror overtones of the series. We’ll be able to find out for ourselves when Dead Space 3 arrives North America on February 5th on Xbox 360, PS3 and PC