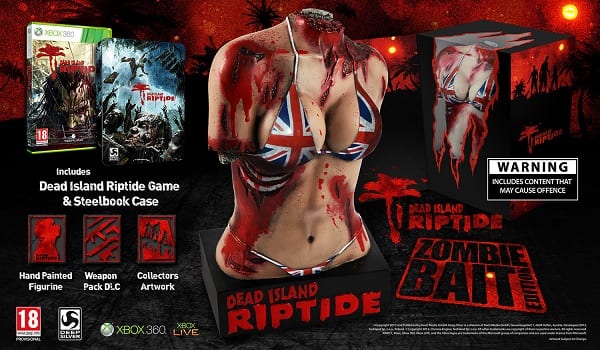 Deep Silver was in for a bit of a shock when they unveiled the content included in the UK special edition of their upcoming zombie-survival game Dead Island Riptide.  The “Zombie Bait Edition” would have included the usual development art and special weapons, but it also came with a very…uh…unique addition.

That would be the foot-tall statue of a bikini-wearing woman’s brutalized torso.  The woman’s arms and neck are nothing but grotesque stumps, and the whole torso is covered in gore–with the notable exception of her breasts.   According to Deep Silver’s press release, the statue was meant to be “Dead Island’s grotesque take on an iconic Roman marble torso sculpture.

As you might expect, there was a bit of a backlash, and Deep Silver has issued an apology for the statue stating that they “sincerely regret this choice.”  Some–including GT’s new Senior Lead Editor David Roberts when I spoke with him about it–have voiced the opinion that Deep Silver orchestrated this as a publicity stunt.  Personally I think I’ll keep Hanlon’s razer in mind, but I can see how this would be really suspect.