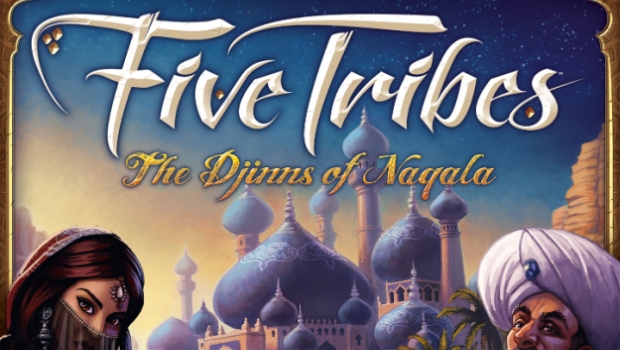 Days of Wonder is known for publishing games that are easy to learn and accessible to just about anyone.  They also don’t publish many games each year, so when they publish something new gamers take notice.  Today they have announced they are publishing Five Tribes, a game designed by Bruno Cathala.

Today, Days of Wonder announced Five Tribes, a new board game set in the Arabian Nights-inspired City-state of Naqala.

Five Tribes builds on a long tradition of German-style games that feature wooden meeples. Here, in a unique twist on the now-standard “worker placement” genre, the game begins with the meeples already in place – and players must cleverly maneuver them over the villages, markets, oasis and sacred places tiles that make up Naqala. How, when, and where you displace these Five Tribes of Assassins, Elders, Builders, Merchants and Viziers determine your victory or failure.

As befitting a Days of Wonder game, the rules are straightforward and easy to learn. But…devising a winning strategy will take a more calculated approach than our standard fare. You need to carefully consider what moves can score you well and put your opponents at a disadvantage. You need to weigh many different pathways to victory, including the summoning of powerful Djinns that may help your cause as you attempt to control this legendary Sultanate.

“After designing a series of smaller games, my inner-self began to insist that I work on something bigger and more substantial,” said Five Tribes creator, Bruno Cathala. “While I’ve already played the prototype hundreds of times, it’s still the game I want to play most often. So please don’t hesitate to come to play with me at festivals – I never grow tired of Five Tribes!”

Five Tribes is for 2 to 4 players, ages 13 and older and takes approximately 40-80 minutes to play. It includes 30 Tiles depicting the Sultanate of Naqala; 4 Player sets with Camels and Turn Markers; 90 Wooden Meeples (Yellow Viziers, Red Assassins, Green Merchants, Blue Builders and White Elders); 12 Palm Trees & 10 Palaces; 22 Djinn cards; 54 Resource cards; 96 Victory Coins; a Scoring Pad; 5 Djinn & Turn Order Summary Sheets; 1 Betting Order & 1 Turn Order Tracks; and a Rules Booklet. Five Tribes is expected to be available in limited quantities at Gencon in August, and then from game retailers worldwide in September at an expected retail price of $60/€54. For more information you can visit the Five Tribes website at: http://www.daysofwonder.com/five-tribes.

Five Tribes definitely sounds like it is an interesting new take on the genre.  Days of Wonder has a great track record as well.  Knowing that Bruno Cathala designed it makes me very interested in this game.