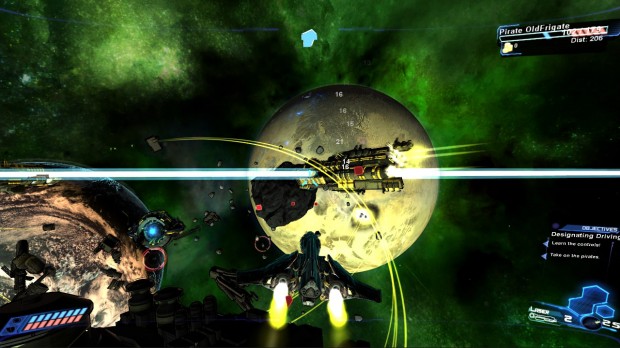 Dawnstar looks like an interesting title.  Mixing equal parts funky jazz, loose morals, and space-flight action, it’s hard not to compare the game to the classic anime Cowboy Bebop.  And considering the universal praise that show gets, that’s the very best praise I could give an indie game.  The background music, called “Top Shelf,” is a licensed track from the Elias Music Library. Kudos to the devs for finding such a great backing track to establish the mood.

If the sweet tunes have you interested in giving Darkstar a look you’ll find it for sale as part of Indie Royale’s Debut 2 Bundle. Here’s the description Indie Royale gives:

Fear, desperation, and organized crime dominate Dawnstar, the lawless sector of the galaxy. A cold war between the major mafias has erupted into a massive battle royal where the ultimate prize is complete control of Dawnstar. As a hot shot pilot, you’re hired to help reign in the chaos ravaging the sector. You’ll be provided opportunities to transcend the chaos or exploit it and position yourself as the next major Mafioso. However, you quickly learn that there are other forces at play that may have doomed your mission before it even began. Free Flight Gameplay Endless loot-driven gameplay. 20+ Storyline Missions. 20+ World zones to explore, battle and trade in. Make choices that impact the story and your relationships with your companions. Open World environment with randomly generated side missions and levels. Thousands of different pieces of equipment to customize your ship with. Co-op based multiplayer. Play with up to 4 of your friends in an open world environment.

Groovy, baby.  Groovy.  If you’re feeling the beat, be sure to check out the trailer below. Just make sure you’re ready for some serious grooving, because while space might be cold, this trailer’s soundtrack is red hot.