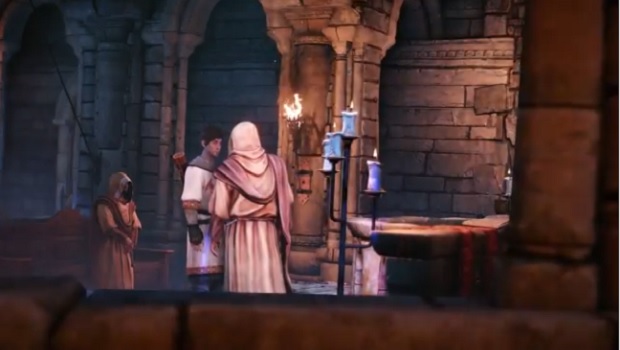 Earlier this year, fans of the Metal Gear Solid series lamented the news that David Hayter would not be reprising his role as the voice of Solid Snake in the franchise’s latest entry. Fortunately, there’s now a new way for fans to enjoy his vocal talent. David Hayter has signed on to voice the lead character Paul Becker in the spiritual successor to Eternal Darkness: Sanity’s Requiem. The game is called Shadows of the Eternals, and developer Precursor Games is fundraising money for the project through Kickstarter.

Shadow of the Eternals is a single-player, story-driven action-adventure steeped in psychological horror that is the spiritual successor to the critically acclaimed Eternal Darkness: Sanity’s Requiem (GameCube, 2002).  The game weaves historical fact with disturbing fiction, centered around a Louisiana detective whose fate is somehow linked to the true story of the infamous Blood Countess Erzsébet Báthory in 17th century Hungary. Developed by Precursor Games, Shadow of the Eternals is expected to launch in fall 2014 on PC and Wii U.

In addition to a PC and Wii U release, a stretch goal would also bring the title to the PlayStation 4. David Hayter had a few comments on lending his iconic voice to Shadows of the Eternal:

“Playing the role of Paul Becker will be a blast as he is both complex and conflicted,” said David Hayter. “I intend to provide gamers with a provocative and memorable experience on the roller coaster ride that is Shadow of the Eternals.”

You can find more information about the game at the official website here, and you can pitch in towards the $750,000 goal on Kickstarter.