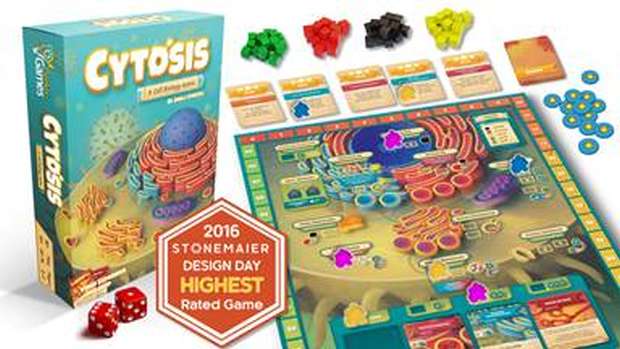 Sometimes it’s hard to be noticed in the Kickstarter crowd.  However, when Stonemaier Games takes notice, then you know it’s something that stands out.  Cytosis, the highest rated game at Stonemaier Game Design Day, is launching its Kickstarter campaign on March 14.

There are many mysteries unfolding every second at the cellular level inside the human body, and the board game scientists at Genius Games want to help you unravel them in their latest hard-science based strategy game, Cytosis: A Cell Biology Game. It is the first game in the world to be designed totally around the actual structure and dynamics of the human cell, and promises a vividly visual, tactile, and interactive tour of this essential building block of life.

The creators of award-winning biology and chemistry games (as well as children’s books) will take players inside a human cell in Cytosis: A Cell Biology Game, where they will compete to build enzymes, hormones and receptors and fend off attacking Viruses! In 2016, Cytosis: A Cell Biology Game was the highest rated game during the prestigious Stonemaier Game Design Day, a day dedicated to play-testing prototypes, game design and idea exchange within the gaming community.

Well-known inside the scientific, teaching and gaming communities, the company is thrilled to announce their upcoming Kickstarter campaign for Cytosis: A Cell Biology Game, the latest addition to its growing product portfolio of games that have been heralded by both the gaming and scientific communities. In the company’s latest board game, science becomes fun and learning becomes addictive when taught by the team at Genius Games. The company has had six other successful crowdfunded projects come to market. The Kickstarter campaign for Cytosis: A Cell Biology Game aims to raise $14,500. Donors pledging $39 or more will receive a copy of the game. Find more details on Cytosis: A Cell Biology Game here, and to reserve a copy, click the “Support This Project” button.

“We are excited to return to Kickstarter to seek funding for our latest board game venture, Cytosis: A Cell Biology Game. People familiar with our other products will find the same level of quality and creativity that they’ve come to expect from us,” noted John Coveyou, founder and director of Genius Games. “Traditionally games are only meant for entertainment and school is where you go to learn. At Genius Games we have always felt that you can make learning fun. That is our mission, to develop games that are not only a blast to play, but that also simultaneously demystify intimidating science concepts. And for a cool behind-the-scenes look into the design, and launch of the game on Kickstarter, check out my new YouTube documentary series, A Kickstarter Launch Story.”

In Cytosis: A Cell Biology Game, players compete to build enzymes, hormones and receptors to fend off attacking viruses inside a human cell. The player with the most Health Points at the end of the game wins!

Players utilize the available organelles within the cell to collect cellular resources such as mRNA from the Nucleus, Lipids from the Smooth E.R., ATP from the Mitochondria, or transport Carbohydrates into the cell via endocytosis through the Plasma Membrane. Players may also utilize the organelles to Translate mRNA into Proteins (either on the Free Ribosome in the Cytoplasm, or in the Rough E.R) or add glucose or lipid tags to their hormones or hormone receptors in the Golgi Apparatus. Players score health points when they complete any of the Hormone, Receptors or Enzyme cards. For 2-5 players, ages 10 and up. The game will be available nationwide in August for $44.99 MSRP.

An opportunity to play a game and learn something too?  Sounds like a winner to me.  Be sure to check it out on Tuesday.