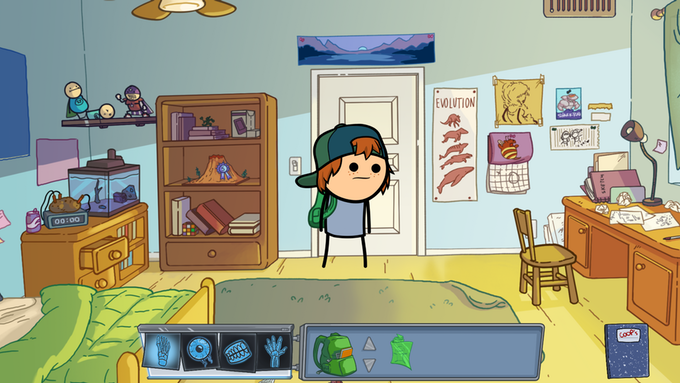 The game follows Cooper “Coop” McCarthy in his quest to keep his head down and make it to graduation without having to deal with an apocalypse. Sorry Coop, you’re about to have a real rough year.

He’s also joined by Sawyer Allen, an aspiring investigative journalist with a know-it-all streak that just might save the day, and Hugo “Chowder” Malone, a consummate “gentleman” with a love for novelty swords and leaving comments on YouTube videos.

For the uninitiated, Cyanide & Happiness is a long running webcomic that has also branched into YouTube shorts and even produced full-length episodic content on their YouTube channel. Last year, they released their card game, “Joking Hazard,” based on the random comic generator where you and your friends work together to create a punchline to a three-panel comic, similarly to Apples to Apples.

The Kickstarter’s goal is $300,000, but they’re expected to hit this fairly quickly. The stretch goals listed are, but not limited to:

In addition the Kickstarter, they’ve launched a “Schmooze Your Own Adventure.”

In addition to Stretch Goals, we’re ALSO running a Schmooze Your Own Adventure where you, gentle backer, can help us convince THE NEW GIRL to go to prom with you!

You, oh sweet sensual backer, get to tell us how you to want to schmooze (or lose) by completing one of the three tasks at every point in the story! WHOA NELLY NOW YOU’RE THE STORY TELLER!

Why should you care? Because we’ll be unlocking SECRET GAME GOODIES for everyone the deeper we get into the story! So let’s get schmoozing so we can give you stuff

How do you choose to schmooze? Email us at [email protected] with proof of your tasks, whatever that entails, and we’ll announce whenever we’ve got a winner! This isn’t a numbers game, it’s all about what we think is the funniest / most impressive entry, so put some guts into your submission!

As you can see, this game is sure to be nothing short of freakin’ hilarious, and my wallet is already burning with anticipation. For more information on the Cyanide & Happiness Adventure Game, or to pledge to the project, check out their Kickstarter.