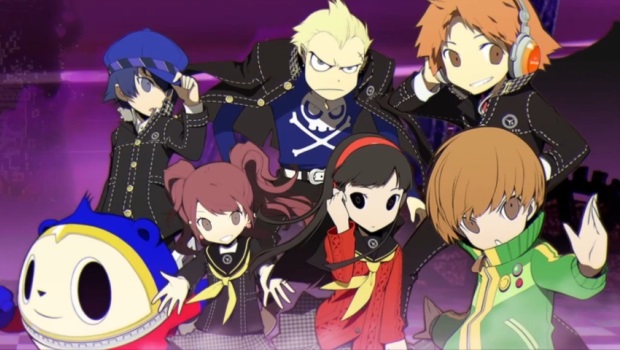 ATLUS has shared with us fantastic news:  you can expect Persona lovin’ on 3DS, PS3, Xbox 360 and Vita. Over the next two years we’ll see four fully localized North American releases. Not familiar with Persona? You might be familiar with the source from which it was spun off, Shin Megami Tensei.

Beyond the two trailers and a teaser video, we also have screenshots for you at the bottom of this article.

Persona Q: Shadow of the Labyrinth, shown in the trailer at the top, is heading to the 3DS this Fall and will be the first time a Persona game has been on any Nintendo platform.

Characters from Persona 3 and 4 have been given a complete visual overhaul to match the Etrian style and plunged into an alternate world resembling Yasogami High School. Legend has it that listening to the end of the bell chimes of Yasogami High’s clock tower causes people to die, and this time the bell tolls for the Investigation Team and the SEES.

Persona 4 Arena Ultimax (below), is a title being developed by Arc System Works and is a sequel to Persona 4 Arena, which is slated for a Fall 2014 release on 360 and PS3.

A few days after the P-1 Grand Prix concludes in the first Arena title, the city of Inaba gets enveloped in a thick red fog and Mitsuru, Akihiko, Fuuka, and Aigis are shown as prisoners on the Midnight Channel. The Investigation Team from Persona 4 and former SEES from Persona 3 must once again fight to their limits in the new P-1 Climax tournament to rescue them and finally uncover the true culprit behind the deadly tournaments.

Persona 4: Dancing All Night  is a 2015 title bound for the Vita, and offers a combat system based on rhythm and includes 30 different music tracks as the team battles it out on the Midnight Stage.

The summer following the events in Persona 4 sees Rise return to Inaba after spending the summer back in her old life as an idol. After hearing rumors about the Midnight Stage, she checks a certain website at midnight and sees a mysterious movie clip and, you guessed it, winds up on the “other side.” Worse yet, she finds out her junior idol peers from the group Kanamin Kitchen are missing as well. She has no choice but to send an SOS to the Investigation Team to help rescue the missing idols.

Persona 5 (teaser below), doesn’t offer much in the way of details, other than we can expect it to be a true sequel, it should be out in 2015, and only on the Playstation 3. Stay tuned for further details as release dates come closer.