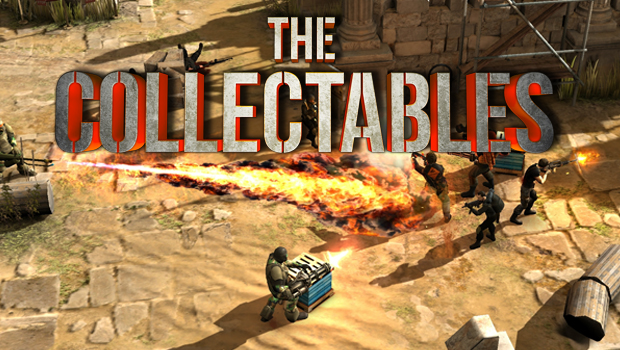 And it looks incredible.

I recently got to sit down with Barry Dorf from the game’s publishing company, DeNA, to take a first look at The Collectables in action. “I could not be happier or more excited about this game,” Barry says with a smile on his face as he navigates the battlefield using an iPad.

It’s easy to see why he’s excited. The graphics look and feel like console quality. It’s a huge step for mobile gaming. From the movement of the soldiers, to the explosions and even the environmental swaying of the trees, the level of polish and detail is impressive. So much so, that Apple has even been seen using The Collectables at tech demos showcasing their new hardware.

Slated to release in 2014 for iPhone, iPad and Android devices, The Collectables puts players in control of a team of up to four mercenaries as they strategically battle their way through a growing roster of environments. After commenting that the game happily reminds me of one of my favorite RTS titles, Barry replies, “XCOM is the first game I thought of when I saw it too, but this looks and plays a thousand times better than XCOM.”

It doesn’t really do it justice, but you can check out the short release trailer below. And while The Collectables has yet to announce a definite release date, players can preregister here for notification when it’s out and they’ll also get a bonus character by signing up. Suddenly waiting in that long line at the post office doesn’t sound so bad after all.
[youtube=http://http://www.youtube.com/watch?v=670pVNI1O0E&feature=youtu.be&w=620&h=350]