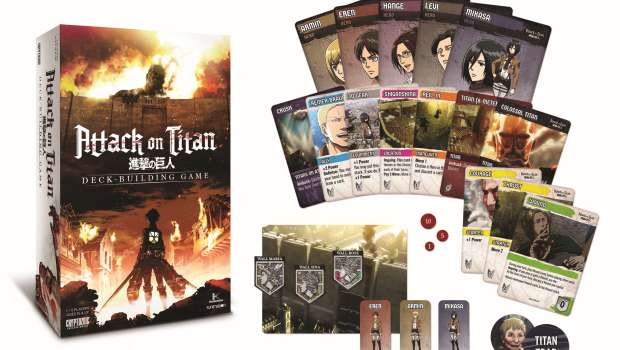 GTS Distribution is one of the major board game distribution companies.  Soon they will be hosting their Come and Play Day for publishers to show off some of the games coming later this year and early next year.  Cryptozoic just announced their lineup for the show.

Cryptozoic Entertainment, leading creator of board games, trading cards, and collectibles, today announced that it will be demoing games at GTS Distribution’s Come and Play Day 2016 at the Omni Hotel in Atlanta, October 24-26. The annual event is considered by many the premiere demo and networking event for board games, as it allows representatives from brick-and-mortar retailers to meet and check out all sorts of games.

“We are thrilled that we are able to play our highly anticipated games from the Attack on Titan and DC Comics universes with everyone coming to Atlanta,” said Dekan Wheeler, Marketing Manager at Cryptozoic.

Cryptozoic will be at PSI’s booth on the main floor demoing and offering chances to play many of its current and upcoming game releases, such as:

Poker Assault — The card game transforms poker into an easy-to-learn, 2-4 player game of combat in which players join factions and craft poker hands that the others must try to defend against. Each player chooses to join one of four factions: the Wolf Pack, Vampire Court, Rocket Patrol, or Invaders. The game adds another twist with cards that have special abilities in each deck, as well as formidable Power Cards that players can acquire if they make certain hands.

Attack on Titan Deck-Building Game — The 1-5 player card game is based on the hit anime series in which heroes try to protect the walls of the last remaining human city from the onslaught of giant carnivorous Titans. The game uses Cryptozoic’s popular Cerberus Engine with the addition of movement, as well as other unique gameplay features that place players inside the world of Attack on Titan. This is the first Cerberus deck-building title to offer cooperative play at the time of its release.

Spyfall 2 — The hit social party game returns, now with a maximum of 12 players, up to two Spies in a game, and 20 new locations. At the start of each round, all players receive secret cards letting them know where they are, except for the one or two players who receive Spy Cards instead. Spies don’t know where they are, but can win by figuring out their location before blowing their cover. Non-Spy players try to ask questions and give answers that prove to the others that they know where they are without the Spies guessing the location. The Spies will also sometimes be asked questions and have to come up with plausible questions without knowing where they really are!

Train Heist — In this cooperative board game, 2 to 4 players take the role of a band of cowboys who work together to stop the corrupt Sheriff and the rich folks of the county from stealing all of the townspeople’s earnings. The game features wooden cowboy miniature figures, which can be used to move across the map, ride one of the two horse miniatures, and hop aboard the moving train, represented by five miniature train cars that travel between the towns on the map. After entering the train, the players move their figures to the top part of the game board, which provides a view of the inside of the train. Players then move their cowboys from car to car and loot the wealthy passengers, with certain poker hands allowing players to steal certain loot, all while evading the ever-watchful Sheriff.

DC Comics Deck-Building Game Crossover Pack 5: The Rogues — In this expansion for Cryptozoic’s popular DC Comics Deck-Building Game series, players can play as one of six of the Flash’s worst enemies, who must work together using the new “Teamwork” mechanic. There will only be one winner, however, so don’t help your fellow villains too much! Players can shuffle the 23 included main deck cards into any DC Comics base set to add variety to gameplay. The pack comes with eight Super Heroes to battle, presenting fresh challenges for fans of the deck-building game series and its expansions.

I wonder if the sequel to Spyfall will bring the original some buzz again.  Still, that’s a nice lineup they have.  If you live in Atlanta and have some free time early next week, be sure to check it out!