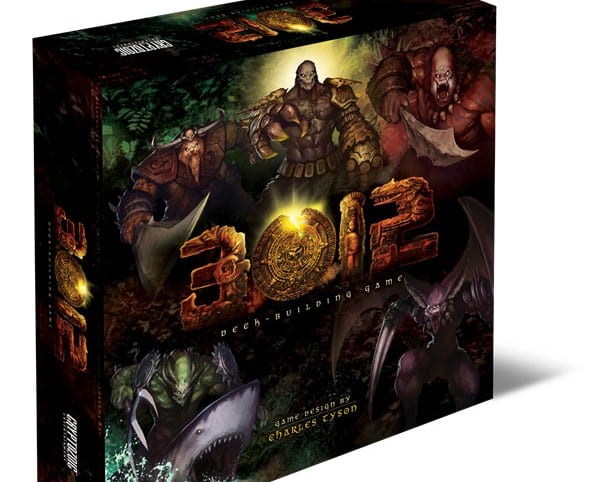 The deck-building genre has really taken off.  My favorite is Thunderstone, but I do have to give my props to Dominion.  Now Cryptozoic has released a new game in the ever-growing genre, 3012.  Instead of featuring a medieval or fantasy setting, they have gone with a post-apocalyptic take.

Cryptozoic Entertainment™,the premier developer of licensed and original games, includingThe Walking Dead™ Board Game and Epic Spell Wars of the Battle Wizards: Duel at Mt. Skullzfyre, is proud to launch an all-new deck-building game, 3012, now available in hobby stores nationwide. 3012 is set a thousand years after the world almost ended, when humanity is divided into five clans, each battling against or forming unsteady alliances with the others in the ultimate struggle for survival. An in-depth and exciting deck-building game, 3012 will pit two to four players against one another as they each take the role of a Hero, competing to amass allies, weapons and action cards in order to dominate the other clans.

Cryptozoic is also the developer of the upcoming World of Warcraft deck building game, and they publish the WoW Trading Card Game as well.  I don’t know if we’ll see shades of either game in 3012, but it has some unique concepts that I could see implemented in other deck building games.  Head to the 3012 web page for more information.