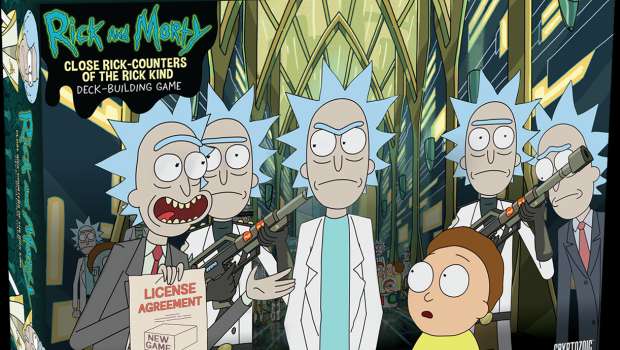 Cryptozoic has become had a string of hits, and they have landed the Rick and Morty license.  They announced their lineup for Gen Con 50, and it’s huge.

Cryptozoic Entertainment, leading creator of board games, trading cards, and collectibles, today announced that it will be demoing and selling several new and upcoming tabletop games, as well as conducting several tournaments, at Gen Con, August 17-20 at the Indiana Convention Center in Indianapolis. Products at Cryptozoic’s booth (#601) include games based on Adult Swim’s Rick and Morty TV series, the anime Attack on Titan, and various DC properties. In addition, there will be some surprise demos of games that have never before been shown in public.

Cryptozoic’s tournaments will take place in Hall A and feature Rick and Morty: Anatomy Park — The Game, Epic Spell Wars of the Battle Wizards, and several expansions for the popular DC Deck-Building Game—Crossover Pack 5: The Rogues, the upcoming Crossover Pack 6: Birds of Prey, and a tournament finals showcasing the soon-to-be-released DC Deck-Building Game Multiverse Box. There will also be tournaments conducted for Master of Orion: The Board Game, Rick and Morty Mr. Meeseeks Box O’ Fun: Game of Dice & Dares, Poker Assault, and Mad Science Foundation. Attendees can check out Cryptozoic’s schedule for the full list of dates and times for tournaments.

“We can’t wait to debut a bunch of new games and get the long-awaited DC Deck-Building Game Multiverse Box into the hands of attendees,” said Adam Sblendorio, Vice President of Creative at Cryptozoic. “Gen Con 50 can’t get here soon enough!”

Cryptozoic will be demoing and selling several upcoming games for the first time anywhere in limited, pre-release quantities:

Rick and Morty: Close Rick-Counters of the Rick Kind Deck-Building Game — Based on the Season 1 episode of Rick and Morty that features a multitude of Ricks from different realities, this deck-building game requires 2-5 players to become various versions of Rick and try to take down the Council of Ricks and Evil Rick. The gameplay utilizes Cryptozoic’s popular Cerberus Engine in new ways, as players use Portal Guns to access the otherworldly Location deck, which includes lots of the bizarre places Rick and Morty visit in the hit TV series.

DC Deck-Building Game: Confrontations — Players select a Super Hero (Superman, Wonder Woman, Aquaman, or Zatanna) or Super-Villain (Lex Luthor, Circe, Ocean Master, or Felix Faust) and join another player for an epic clash against two opponents. Ally cards can be played during a teammate’s turn to lend some assistance. Each playable character has three unique versions—when one is knocked down by the opposing team, a player replaces it with the next one, which has boosted abilities and is even more difficult to take down. Though a standalone game, it can also be combined with any previous DC Deck-Building Game for an even bigger experience.

Master of Orion: The Board Game — Utilizing art from the 2016 reimagining of the classic video game, this competitive tableau-building game requires 2-4 players to choose from several races (humans and various alien races), build systems using their cards, and manage their resources in order to win. Victory points are gained by playing cards, attacking opponents, and having certain resources and cards at the end of the game. The winner of the space-themed game will be anointed as the Emperor by the Galactic Counsel.

Cryptozoic will also be demoing and selling several games that have been recently released:

Rick and Morty: Anatomy Park – The Game — Based on the episode “Anatomy Park” from Adult Swim’s Rick and Morty, the 2-4 player strategy game sends players into the body of Ruben, a homeless man in a Santa suit, to build a nearly-microscopic amusement park utilizing his major organs…and some disgusting minor ones. Players must design the best park possible by placing tiles while simultaneously avoiding and fighting Diseases, such as Tuberculosis and Hepatitis A. Certain actions shift around Ruben’s internal organs during gameplay, causing unexpected effects and forcing players to act out embarrassing bodily functions!

Attack on Titan: The Last Stand — Based on the popular anime series, this board game puts one player in the role of a fearsome Titan, threatening the last remaining human city. The other players are brave Heroes trying to protect the populace and preserve the supply depot in the final bastion of humanity! Designed by the award-winning Antoine Bauza and Ludovic Maublanc, the game requires strategic utilization of dice and features unique vertical gameplay, as the Heroes move up and down both the Tower and the 15-inch tall Titan Standee.

Train Heist — In this cooperative board game, 2 to 4 players take the role of a band of cowboys who work together to stop the corrupt Sheriff and the rich folks of the county from stealing all of the townspeople’s earnings. The game features wooden cowboy miniature figures, which can be used to move across the map, ride one of the two horse miniatures, and hop aboard the moving train, represented by five miniature train cars. After entering the train, players move their cowboys from car to car and loot the passengers, with certain poker hands allowing players to steal certain loot, all while evading the ever-watchful Sheriff.

There’s a ton of games to play there at Gen Con.  Be sure to look for some early copies there!