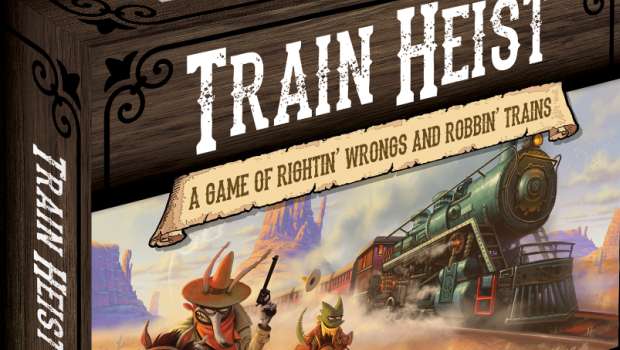 The wild west is one of the truly unique settings of Americana.  While it’s not the most popular setting for pop culture, it never seems to completely go away.  We’ve even seen a few board games using the setting such as Spurs and Colt Express.  Cryptozoic is partnering with Tower Guard Games to bring Train Heist in 2017.

Cryptozoic Entertainment, leading creator of board games, trading cards, and collectibles, today announced its partnership with Tower Guard Games for a wide release of Train Heist in early 2017.

In this cooperative board game of “rightin’ wrongs and robbin’ trains,” 2 to 4 players take the role of a band of cowboys who work together to stop the corrupt Sheriff and the rich folks of Notting County from stealing all of the townsfolk’s earnings. Creator Sean McDonald ran a successful Kickstarter campaign for the game in 2015 that earned double its initial funding goal. Reviews for the game were overwhelmingly positive and it stayed on BoardGameGeek’s “Hotness” list for most of 2015. As the publisher for the game, Cryptozoic will provide a widespread retail release and help it find a much larger audience.

In Train Heist, each player starts by choosing a cowboy miniature figure, which can be used to move across the map, ride one of the two horse miniatures, and hop aboard the moving train. The train is represented by five miniature train cars that travel between the three towns on the map. After entering the train, the players move their figures to the top part of the game board, which provides a view of the inside of the train. Players move their cowboys from car to car, looting the corrupt and wealthy passengers, with certain poker hands allowing players to steal certain loot. Simultaneously, players have to evade the evil Sheriff, who patrols the train and is looking to throw the cowboys in jail. After acquiring the loot, the players race on their horses to return it to the towns, so the townspeople have something to pay the Sheriff the next time he comes around. If a town has nothing to give the Sheriff, the players move the Hangman Marker one knot toward the noose.

Making the game even more complex are Event Cards, which can cause the train suddenly to speed up or switch tracks. Other features on the map are Crackpot Canyon and various tunnels, which knock a cowboy off if he is on the roof of the train or help a cowboy escape the Sheriff if they are both inside the train. Plus, there’s a deck of Wanted Cards that give players special abilities if they perform impressive feats that bring them renown.

Train Heist will be available at retailers nationwide in early 2017. Cryptozoic will announce a specific release date in the coming months.

It’s always interesting when a game claims to be competitive and cooperative.  I hope that Train Heist can pull off both successfully.