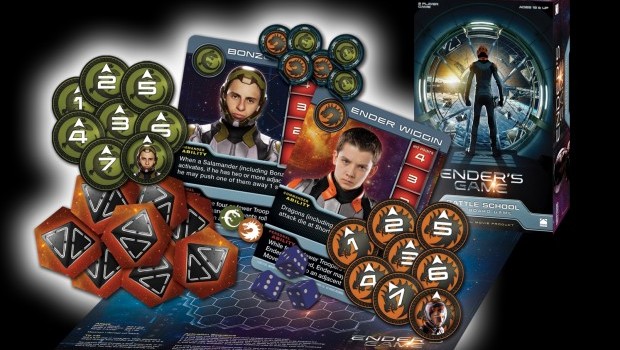 With GenCon starting on Thursday, a lot of board game news is being announced. Cryptozoic is no stranger to the scene, and their most recent effort with Batman Arkham City Escape was actually a pretty good game. They have now announced three new games, one based on The Walking Dead, one based on Enders Game, and one based on Assassin’s Creed.

In The Walking Dead: The Best Defense players take on the role of the survivors such as Rick, Daryl, and Michonne from the television show. Players must work together to defend the resources at four locations from approaching ‘Walkers.’ In this game, cooperation is key, as all players work to survive twelve rounds without running out of resources. Event Cards, which are dealt out with each round, bring calamities and ‘Walkers’ into the Game, and it’s up to the Leader of each round to work with the other players to prevent ‘Walkers’ from destroying their resources. However, if you feel the Leader’s decisions aren’t what is best for the group, you can defy the them for a price.

Ender’s Game Battle School pits two players against each other in the zero gravity arena of the International Fleet’s Battle School, with one player commanding Ender Wiggin’s Dragon Team and other player commanding Bonzo Madrid and the Salamander Team. Commander cards for Wiggin and Bonzo come with special abilities, some that help the whole team, and some that only help the commander., Each player moves their team around a zero gravity arena in an attempt to capture the other team’s gates or to freeze members of the opposing team with their laser-light guns. The player to either capture all of their opponent’s gates or freeze the opposing commander is the winner.

Cryptozoic Entertainment™, the premier developer of original and licensed games, today announced an all-new board game based on the award-winning video game series from Ubisoft, “Assassin’s Creed.” The game, which is set to arrive this winter, lets 2-4 players compete in a test of wit, cunning, and cardplay as they stalk their prey in the world of Assassin’s Creed.

Initially launched by Ubisoft in 2007, the first five Assassin’s Creed games have sold more than 55 million units worldwide, and the franchise is now established as one of the best-selling series ever. Recognized for having some of the richest, most engrossing storytelling in the industry, Assassin’s Creed transcends video games, branching out into other entertainment experiences including comic books, mobile games, novels, as well as a feature-length movie currently in development.

These are some high-profile licenses that Cryptozoic is working with.  All of these games are scheduled to come out by the end of the year.  We should have even more info on these three after GenCon this week.