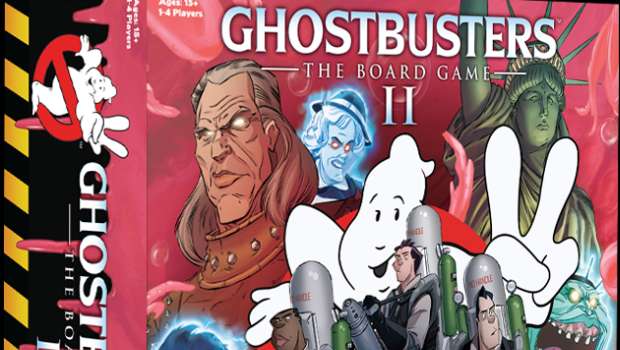 The original Ghostbusters movie was a huge hit, mixing humor with some horror and supernatural elements.  The ghost logo has become one of the most recognized logos worldwide.  Unfortunately, it has also spawned a couple of disappointing sequels.  However, that doesn’t mean that a game using that story can’t be interesting.  Cryptozoic has announced that that Ghostbusters: The Board Game II will be released in a couple of weeks.

Cryptozoic Entertainment, leading creator of board games, trading cards, and collectibles, along with Ghost Corps and Sony Pictures Consumer Products, today announced the August 23 release of Ghostbusters: The Board Game II. Following up on the acclaimed first game, this massive standalone expansion has 1-4 players taking on the roles of the Ghostbusters as they investigate the Mood Slime that has flooded New York City, causing earthquakes and riots in an attempt to bring Vigo back. Inspired by the Ghostbusters movies, comics, and toylines, the game has players taking on the Scoleri brothers, riding the Statue of Liberty, and battling through Vigo’s Ghost army. It features highly detailed miniature figures based on original designs by Dan Schoening and an original story by Erik Burnham, both veterans of IDW’s Ghostbusters comic book series.

“It’s an honor to bring the Ghostbusters universe of film, toys, cartoons and comics into a game once again,” said Adam Sblendorio, Vice President of Creative at Cryptozoic.

In addition, two expansions for the game will be available September 20. Louis Tully Plazm Phenomenon: Expansion Pack adds Louis Tully, the Ghostbusters’ bumbling accountant and lawyer, and four new Scenarios to the game, as well as Entities like Titanic Ghosts, the Theatre Ghost, and the Giga-Plazm. Slimer Sea Fright: Expansion Pack makes Slimer part of the team as the Ghostbusters take on the fearsome skeleton crew led by the Ghost pirate Captain Jack Higgins in four new Scenarios.

Ghostbusters: The Board Game II is an episodic board game in which players battle paranormal Entities, seal Gates that leak Ghosts, investigate giant pockets of negatively-charged Slime, and use Ghostbusting Equipment, as they try to save the world yet again. Equipment Cards offer an array of powerful Weapons, devious Traps, magical Tomes, and helpful Utilities that can be used to win. Each Ghostbuster has Actions that can be used during a player’s turn to fight Entities, move, drive the Ecto-1a, deposit Ghosts into the Spirit World, place Extracted Plazms into the Ecto-1a’s Ecto-Tank, switch between different types of packs, and remove Slime from Ghostbusters.

Cooperation is a key part of the game: Teamwork, planning, and resourcefulness are needed since players win or lose as a team.

Get ready for the pink slime of Ghostbusters in less than two weeks.