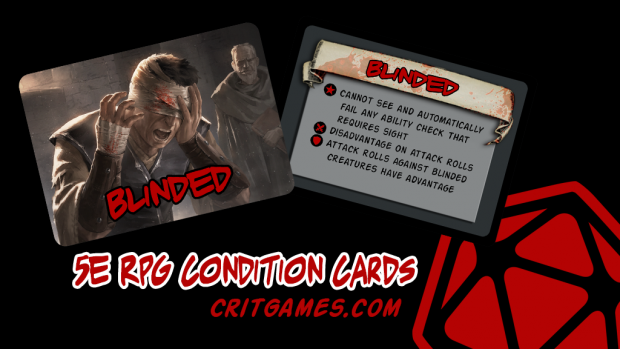 Any of us playing Dungeons and Dragons Fifth Edition has had to spend a few minutes pouring through the player’s handbook for conditions. Poison, blind, and paralyze are simple enough to use but too complicated to remember without having to look up. Crit Games is setting out to solve this problem with its Condition Cards.

Right now they are running a Kickstarter for its Condition Card decks, each of which are 52 card decks with 4 copies each of the conditions from the 5E Player’s Handbook, perfect for keeping track not only of which of your characters are stunned, but what that means for them.

The artwork, layout, and design are all complete for the Condition Cards on Kickstarter.  In addition, Crit Games is creating a second deck called the Combat Deck as part of the stretch goals.  The Combat Deck will contain cards for tracking combat.  Additional cards will be unlocked during the Kickstarter campaign.

This Kickstarter will be live now, June 7th, until July 11th. Check it out for more updates on this continuing products.