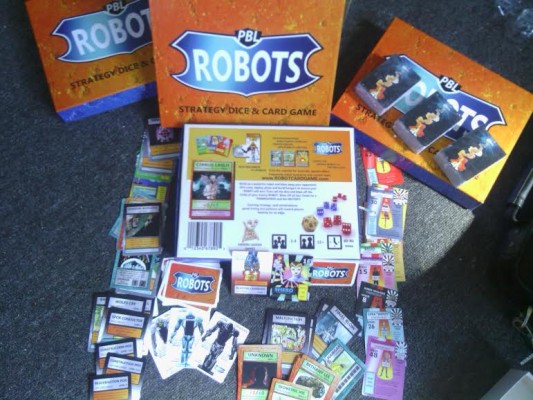 For a while robots battling each other were a hot commodity.  BattleBots and Robot Wars were television shows with a cult following and small robots, with Robot Combat League coming around a couple of years ago with robots around a full story tall.  Now Hidden Ladder Collective is trying to bring brawling robots to the table with PBL Robots.  Here are eight questions with William Hessian of Hidden Ladder about PBL Robots.  You can check out the Kickstarter here.

Where did the idea for PBL Robots come from?

The idea for PBL ROBOTS came at a time when I was first being exposed to Pokemon the collectible card game, and robot anime like Gundam Wing and Macross. Basically, I went searching for a card game that I could play themed around fighting robots. I found a few games that really did not meet my expectations. The game I wanted did not exist, so I decided to make it. I hand drew the first prototypes in my parents basement.

Are you and the designers fans of BattleBots or Robot Combat League?

I remember stumbling on Battle Bots with my brother and my dad and falling in love with it immediately. We went nuts, it was so much fun! We did not miss an episode for the next two years. We are big fans. John and myself have spent time researching old videos and folklore of of Battle Bots and Robot Combat League (among other robot related things) while we developed this game.

Your Kickstarter says you’ve been working on this for over 10 years. Why did you decide to do the Kickstarter now for PBL Robots?

The reason we are doing Kickstarter now is that the game is finally ready. During the 10+ years it has spent in development it has always had some big holes to be filled, and it was not until John joined the team and started filling in some of the gaps, refining elements and adapting more rigorous playtesting that it really started to feel complete, which gave us the confidence to launch a Kickstarter. We have always been very careful to make sure we are bringing our best product to the table, and made sure to give it time to develop.

Who is involved with creating the game?

For nine years the game was created and developed by myself (William Hessian) with help from friends and playtest groups in the Midwest. I would basically play the game with everyone I knew and record all their ideas, feedback and experiences. When I taught art class I would always bring it in for the kids to play on free time, which was a great opportunity to get some raw and valuable feedback. In 2013 I introduced the game to the youngest member of our Hidden Ladder Collective, 9 year old Luke Sekera. Luke, who is a brilliant kid, enjoyed the game so much that he went home and invented a handful of awesome cards (all of which eventually was adapted into the game). Luke became a big advocate for our game in social settings and would challenge people to play. Luke eventually convinced John Supinski to play. John and myself were good friends at the time but I had never exposed him to the game. Even in the rough hand drawn prototype version, John was also very impressed by the game both visually and thematically. He eventually gambled on rights to the game with a die roll, if he rolled a ‘7’ he would gain rights to the game. As you can guess, a 7 was rolled and the rest was history. In the next year we tore the game apart, analyzed it, we went over all of my 8 years of notes, we went in all kinds of directions testing out ideas and concepts, we invented characters, story lines, and new abilities. Once the game was really taking shape Abbeth Russell, one of the founders of the Hidden Ladder Collective, jumped on board as the lead playtester. Eventually over a dozen artists, musicians and poets from the collective joined our playtest and development parties and everyone was chipping in to help improve the game. Kara Oster also got on board to help manage, edit and organize things as we began to implement a more serious business plan for the game.

You could have just used robots battling themselves. Why did you add bunkers, pilots, and mechanics?

The world and sport of PBL ROBOTS is diverse. There is a full blown science fiction story that lies between the cards themselves and many of the elements in the card game directly reflect the complexity of the world we have created. The game is about ROBOTS battling each other, but good resource management is how to win the game. Crew members, pilots, hangars and bombs and shields are all very important elements to developing strategy and building combos. The diversity of card types also allow for very different deck builds and difference strategies from one game to the next, creating a game that is fun to replay again and again.

What components are included with the game?

Some of our kickstarter stretch goals could boost our components list! Which would be really fun.

Have you considered using a board with a grid for the players to battle against each other, with distance being a determining factor for hits and misses?

We have considered this, but the game play does not benefit from a board. The strategy comes mostly from resource management than it does from tactical decisions. Imagine an invisible boxing ring in the sky, this is where our ROBOTS fight. Distance is also a non-factor because the ROBOTS are in close quarters and can engage from any limb at any time. When you play you are trying to manage crew, hangars, pilots and upgrades and gain the edge before your limbs get blown off.

If the Kickstarter is successful, when can we expect to see PBL Robots on store shelves?

As part of our Kickstarter Campaign we are reaching out to a handful of small locally owned gaming stores (our favorite kinds of stores) across the country hoping to let these independant stores be the first to sell our games. We asked our followers on Twitter and Facebook to message us their favorite gaming stores so that we can contact them directly. If everything goes according to plan we should have games in a bunch of these small stores across the country as soon as the printers print the game. Approximately two months after the Kickstarter ends.