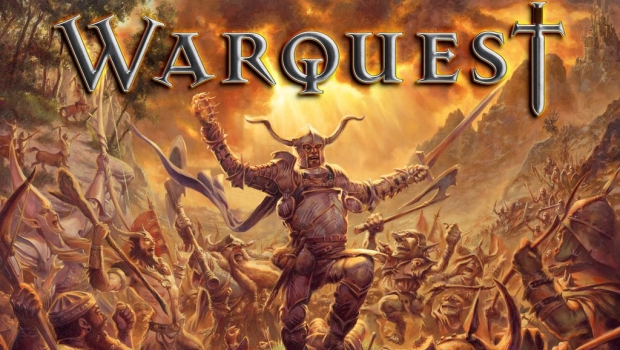 If you ever played Risk, then you’ve experienced the thrill of moving armies across a map and rolling dice against opponents.  Conquering the world is a simple concept that everyone understands.  However, it seems like shorter games have become more popular, and games with “dudes on a map” have been lacking recently.  L4 Games with their new Kickstarter WarQuest is trying to take a new approach.  I recently asked Keith Blume of L4 to find out more.

What games influenced you into making WarQuest?

Glenn was influenced by games he played as a kid, and Divine Right specifically inspired him with its amazing back story. So with WarQuest, he wanted to create a game that fully immerses the player in the world of Myrathia.

What is the setting behind WarQuest?

Myrathia is a land that has been torn by strife for a hundred years. The kingdoms of man have been at war and laid waste to each other. During the wars, they have pushed the other races to the periphery. Players take the role of warlords, assembling warriors of these races (orcs, goblins, dwarves, elves and beast men) to reunite and reclaim Myrathia under his/her own banner.

What makes WarQuest different from other war games?

I think WarQuest does a great job of telling a story through the game and the art together with the gameplay combine to make an amazing gaming experience. The suspension of disbelief is extremely high for this game. And it is a grand strategy game that doesn’t have a lot of downtime. I wanted to create a game that had that epic feel without the epic downtime.

How did you choose the factions included within the game?

In looking back at the fantasy world influences I researched the games, literature and figures that captured my imagination in my youth. For example Bugbears (an expansion) are familiar to people primarily from the D&D universe and I saw some figures that rekindled my enthusiasm and excitement for that race.

It seems like there has been a movement to make shorter games in recent years. Why do you think WarQuest will be successful in today’s market?

Part of the move away from longer games was often a result of the downtime. WarQuest is a grand game, but it does not have a grand set of rules. It is a fun, engaging and expansive game that is easy to get into. It is a big box game and makes no apologies for that. That being said, you can get in and start playing this game in about 5-10 minutes.

How do you keep all players engaged during every turn and limit downtime?

You have three actions you can take each turn. There are eight options to choose from. These options do not take long (move, move and engage in combat, go on a quest, buy a power card, recruit troops, recruit a lieutenant, take control of a region, or tax a city). The longest move action is combat and we worked to make that an engagement that had strategy without becoming cumbersome.

How is combat handled?

When two armies from different warlords are in the same location, combat ensues. Each player has two combat ranks (melee and ranged). There is also a reserve rank and a retreated rank. Each player can put up to 5 units in each of the combat ranks. An important thing about how many units to place in your combat ranks…if a rank is ever empty after an attack it collapses and cannot be refilled.

Each figure has tabs on the front of its base and the back of its base. The front tabs tell you the number of attack dice rolled (each attack die has 1 “hit, 1 “retreat” and the rest of the sides are blank). The tabs in back tell you how many hits the unit can take. The defender ranged units fire first (assigning damage and retreats to whichever units he/she prefers). The attacker then can fill in as many units as he/she wishes (up to the 5) and then fire a return missile volley. The defender then fills in ranks and executes the melee attack (melee units only doe damage to the rank in front of them). Then the attacker fills in ranks and attacks with his/her melee units. Before the next round there is a rally phase (each leader can rally a unit from the retreated area to the reserve area). Then if a player wishes to retreat he may (there are some penalties for that). Each race also has a special benefit (for example dwawrves must be assigned damage before any other unit so they are an excellent shield unit for your high value units).

Do you have any plans for possible expansions?

YES! We have three possible expansions in the works:

The Wraith King – This expansion adds a new and exciting end-game to WarQuest. On turn 13, the player in last place ceases to play as a Warlord and instead takes control of The Wraith King and his undead army! The Wraith King has only one goal: to destroy every city in Myrathia and turn the land into a vast land of the dead.

Elites – The Elites are the more powerful units of the common races. Recruiting them gives your army more ‘punch’ and flexibility.

High Elves – There is no other race as majestic as the High Elves. Their skill with a bow and on a horse is unequalled in Myrathia. When their armies march out of their ancestral homeland on the northern shores, Kingdoms tremble.

WarQuest sounds like a game that has an easy learning curve with a lot of depth to keep you coming back for more.  With the possibility of more expansion armies, even more strategies are available.  Be sure to look at the WarQuest Kickstarter page for more information.