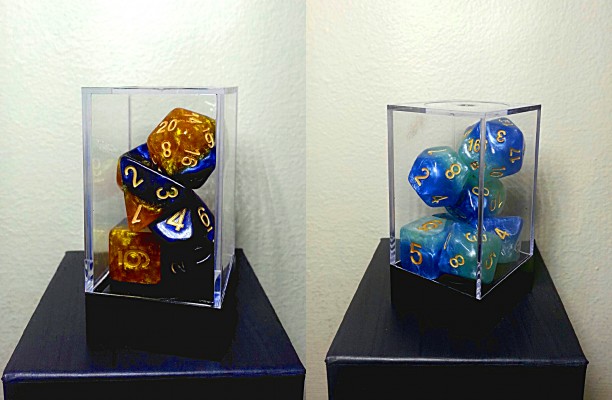 Dice are an integral part of gaming, even more so in role playing games.  Sure, you want dice that roll evenly, but it doesn’t hurt to have a little flash.  I recently found out about the Halfsies Dice Kickstarter and asked John Wrot from Gate Keeper Games eight questions about them.

Who are you and what is your company?

My name is John Wrot!, and I’m the President of Gate Keeper Games. I like saying that, because even though I get to choose my own title… it still fun to say every time.

Gate Keeper Games is a family run company about 99% me, with some Communications help from my Wife (she writes our press releases, etc.). What do we do? We design awesome gaming stuff that nobody else has made yet. Usually that’s games, this time around we’ve designed all new DICE! : )

Mostly because I’m a person. : ) It’s kinda like food, and… not wearing your pants around the house!
By virtue of being human, you like it!

Let’s be honest. Dice appeal to both halves of the brain… Dice are pretty, they’re fascinating numerically, the shapes are engaging, they’re geometrically perfect, the colors are great, and they represent hope. Every time you roll a die, you roll it with hope! Even if you’re just goofing around… you still get excited every time you roll a 20.

Do you currently have a favorite die game or dice set?

Yes. My GM dice. I have a set of dark green dice, that somehow ended up my GM dice about 12 years ago, and they still are. After being around that long, and being part of so many epic stories, you gotta love them. My favorite die is my GM d20. I actually lost the green d20 of the GM set some years ago, and I have a blue d20 that has taken its place. It’s totally the little orphan dice that ended up saving the world. I love it.

Where did you come up with the idea of “Halfsies Dice”?

They were both awesomely appointed, and a total accident.

With no option to use existing dice sets on the market to fulfill our promise to our backers (something take very seriously), we went and invented a new type of 2-tone dice instead. They’re half & half in design, and we call them “Halfsies.”

How are these made differently from other dice?

Most of the 2-tone dice sets on the market right now are 2-colors swirled, or marbleized, together, perhaps with some sparkles. And they’re nice. Don’t get me wrong, I own a lot of them. : )

Halfsies on the other hand goes a few steps beyond: The colors are 2-tone, but instead of swirling them like the other dice on the market, we left them half-&-half while blending the 2 colors where they meet, causing a smooth color transition. Then we added pearlescence to each half of the die, so it shines brilliantly. Finally, to ensure that pearl shine can be seen, and to increase the vibrancy of the total package, we made them with semi-translucent resin. When you put a flashlight up behind them, or even hold them up to a window, the colors get even brighter than what you see in the in-the-case pictures. They’re really really beautiful.

How do you decide which colors to use?

We actually decided it would be best if you, Keith, and your readership were the ones to decide the colors!

To start our campaign we thought it would be a good idea to ensure there was something for everyone. So we started with pre-determined Red on Red, and Green on Green, and a Blue on Blue sets. Each set’s 2nd half is much lighter in color for a strong contrast and slightly silvered for a metallic boost.

After that we’re leaving it entirely up to backer vote all the way through set #8. If we hit that goal, we’ll also unlock the Yin Yang set (Pearlescent Black & White), as a bonus.

So you and you readers get to choose what colors to use. And, yes, any shade of any color is an option.

Are you anticipating making these available through retail channels, conventions, or other means?

That’s all still in the works. It really depends on how successful the campaign is.

If it’s successful enough we’ll get some retailer attention, and they’ll want to pick them up. We hope that happens, it could mean the difference between my Wife getting to remain a stay at home mom, or returning to work. (I have strong motivations behind what I do.)  : ) – We’ll definitely have a few sets left over for local conventions and the few big ones we attend each year (GenCon, etc.).

Thought this much is for sure: As per good Kickstarter etiquette. Halfsies Dice are cheaper on Kickstarter (as low as $7 per set), then they will be in retail or at conventions. And they come with free shipping to anywhere in the USA.

Do you have any other projects in the pipelines, such as a d30 or non-standard dice?

Thanks for asking. We’ve had a ton of requests for d6 and d10 blocks, so we’re looking into that pretty strongly right now. In the meantime, we’re working on finalizing the rule set for our next game release, A.D.A.P.T., a unique card game with never before seen mechanics. But that’s all secret for now, because our Halfsies backers are still helping us build the game with their answers to my semi-random bonus question at the end of each Dice Selection Survey.

Thanks so much for taking the time to do this interview with our humble little company. It’s been a pleasure. I hope to get to meet some of your readers, and I look forward to seeing what dice they’ll be voting for.