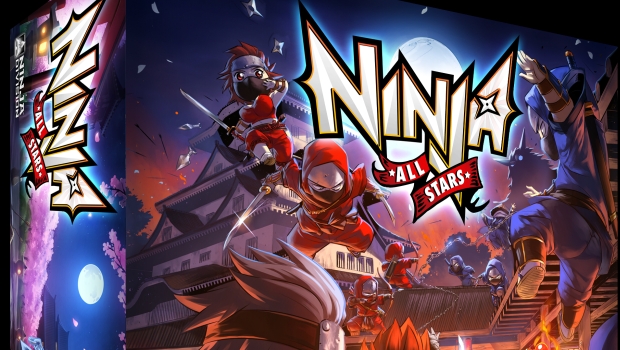 Soda Pop Miniatures is the team behind Super Dungeon Explore.  As you can see in my review, I enjoyed quite a bit although there are some undeniable issues.  When I heard about Ninja All-Stars, it had the same look as SDE, but the gameplay looked completely different.  It made me want to find out more, so I sent eight questions to them.  John Candice, Creative Director and owner of Ninja Division/Soda Pop Miniatures sent me the answers.

What is the premise or story of Ninja All-Stars?

Ninja All-Stars is a game set in a magical land of elemental powers, tradition, and of course.. ninjas! To keep the warring clans of Kagejima at peace, the Moon Princess calls together all the ninja clans of Kagejima for a great contest of skill. The winners, awarded the honor of serving the Moon Princess and her court, and helping to keep a careful peace negotiated with a terrible enemy. As leader of your clan, you must recruit and direct your warriors to victory in various challenges pitting you against the other clans.

How does Ninja All-Stars play?

We have a mountain of content available on the basics of game play.  You can find several articles here.

What makes Ninja All-Stars different from other miniature games?

For starters, Ninja All-Stars walks a careful line of being both a miniatures game, and a great community/league board game. The miniatures are the best around, as should be expected from the Soda Pop and Ninja Division team, but the game, is very different than our other skirmish or dungeon diving successes. It is intended to be a series of games played with more than one opponent. With league play, experience and leveling systems, and lots of variety in challenges to keep the games fun, fast, and furious.

How do each of the clans differ?

Each of the core clans hold affinity to one of the key elements of Kagejima. Formed by their chosen element, and following a path of their chosen totem beast, each clan has developed secret arts and skills around their unique areas of expertise.

For some more information on the clans of Kagejima, I recommend you have a look at this: http://ninjadivision.com/ninja-all-stars/

How is combat resolved?

Players roll a number of special elemental battle dice to the value of their attack or defense. Elements in Kagejima have opposed powers in other elements, and dice then cancel. The player with the most remaining dice, or with priority in the event of a tie, may select which element will resolve the combat. The elements of battle will determine which outcome will come from an attack, with some risk… the attacking player might defeat his rival with a knockout strike or stunning hit, or, if attacking poorly, might get knocked out himself. In other cases, the battle might not finalize in a KO’d model, but the combat may travel on the board face, with a flurry of strikes and sword swings, or perhaps the attacking ninja simply executes a perfect throw, tossing his opponent away from the combat. With other status effects, stealth rules, moon deck cards, and magic… combat can be a tactically satisfying risk and reward system to help your clan achieve victory on the tabletop.

Is there any difference between the two different sides of the game board?

We will be introducing more boards and arenas to fight in, over time. The two sides will be differently themed, one side a castle courtyard, and the other side, a sleepy ninja village. Each with different breaks in LoS, elevation, and areas for ambush, providing more complexity in gameplay.

Do you expect to have additional add-ons for Ninja All-Stars after the Kickstarter has finished?

We expect a very good response across clubs and retailers world-wide, and are already planning supplemental content, fun new ways to play, and new awesome models for your collections.

When do you expect Ninja All-Stars to be released?

We have successfully funded, and we have greatly controlled our roll-out to not exceed our bandwidth for development and production so we can hit as close to the promised delivery time as able. Look for Ninja All-Stars in stores by Christmas.

They recently shipped their Forgotten King Kickstarter, so they have plenty of experience behind them.  If any of this sounds interesting, be sure to check out the Ninja All-Stars Kickstarter page for more information and to back it.