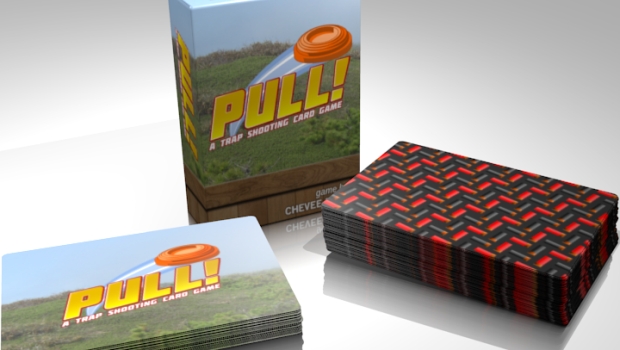 Sometimes you see a game theme and you wonder how they came up with it.  Then you look at the game and think that it just might work.  That’s the case of Chevee Dodd and his current Kickstarter Pull!  I recently asked him eight questions to find out more about him.

Can you tell us a little bit about yourself?

I’m a 35 year old father of 2 from a small town in West Virginia. I grew up playing board and card games with my family and transitioned into Magic: the Gathering along with everyone else in the early 90s. I’ve been designing games since 1997 but I’ve only recently started taking the hobby seriously enough to seek out publication. Other hobbies I enjoy include woodworking, fishing, and video games.

What are some games that influenced your taste in gaming?

Like most, I started getting serious about board games with the release of Magic. I’ve never been a great player at CCGs however, but I was fascinated by the meta-game of deckbulding. Studying probabilities and figuring out how to beat the current meta was way more fun to me than actually playing the game. Because of that fascination, I sought out more intellectually challenging games in the beginning. Settlers, Acquire, Puerto Rico, Tigris and Euphrates would be some examples. As I’ve played more and more games over the past few decades, I’ve learned that I’m more interested in the social aspect of gaming and my tastes have shifted focus to lighter games that I can enjoy with a group of friends and a few beverages. Tichu has been a huge hit for years and currently we are enjoying DC Deckbuilder and Marvel Dicemasters.

How did you get your start in designing games?

I did some work with United States Playing Cards during the summer of 1997 for the X-Files CCG. At Origins that year, I met James Earnest. Cheapass games was his new upstart company and nobody had heard of him or his crazy idea until that show. I was fascinated by the cheapness of his products, but also the elegant mechanics and engaging gameplay he could pack into really simple designs. I told some friends “I could do that” and they just laughed it off. I was dead serious and I haven’t stopped designing since.

How did you come up with the theme of skeet shooting?

I didn’t! I actually was in a pretty serious creative slump and I turned to Twitter to help get me out. I asked if anyone had any theme ideas I could try in a simple card game and one of my followers suggested “Shooting clay pigeons /w trick taking.” I couldn’t get that idea out of my head and I just sort of ran with it.

Do you have a difficult time creating unique themes?

Not exactly. I find that I’m mostly a theme-first designer. I pull a lot of mechanics and inspiration out of the theme and it’s difficult for me to design without that. As a creative person, I can dream up all sorts of interesting topics… the hard part is finding one that you can make a game out of. With this game, it just worked. I managed to make a traditional trick taking game with a theme and it doesn’t feel tacked on. That’s the harder part.

What kind of visibility has Kickstarter given you?

That’s difficult to judge. I’ve spent two years building myself up online before venturing into Kickstarter land. A significant portion of my Kickstarter backers came directly from this effort. When looking at the Kickstarter stats, it’s very difficult for me to say what percentage of them just found out about me versus who knew me before I hit the launch button. I’ve had a few friends share my campaign with their backers and that’s brought in quite a few new pledges, but again, that’s hard to qualify. I have seen a significant up-tick in Twitter followers since launch, so it’s certainly not hurting!

Kickstarter, to me, has given me a bit of validity. I could keep releasing my games as print and play or print on demand titles… that’s easy for anyone to do. Launching those games on Kickstarter, however, means that I feel strongly about the game. I’m making a statement that I’m serious about this industry and I’m going to do everything I can to make my dent in it… and I think that lends a bit of credibility.

Do you have any other games in the works that you can share with us?

I’m working with Mayfair right now on a dice game I showed them last year. It’s about vikings and city building. It’s a design I’m extremely proud of but it needs a bunch more development. Mayfair has been great to work with and has helped me take the game from a nifty idea to full-blown awesomeness.

Aside from that, I have a 2 player zombie game that is basically done design-wise, I’m just waiting on the final art before I decide what to do with it. This past week, I began working on something much larger than I am used to… a game with a board. This game is about the Native American fur trade and the impact the settlers had on tribal conflicts. It’s a sort of route-building, worker placement, resource management game that I hope to be testing very soon.

How can our readers find out more about you and your games?

I Tweet. A lot. If you want to follow my craziness in a sort of stream-of-consciousness kind of way, look me up there: @cheveedodd

Otherwise, my website is the best bet. I try to only post there when I have some bigger news or more cohesive story to tell and things are a bit less wild (usually) http://www.cheveedodd.com

He definitely is active on Twitter, whether Tweeting about games or what is on his mind.  I highly recommend checking out his Twitter feed and the Pull! Kickstarter, as there isn’t much time yet on it.