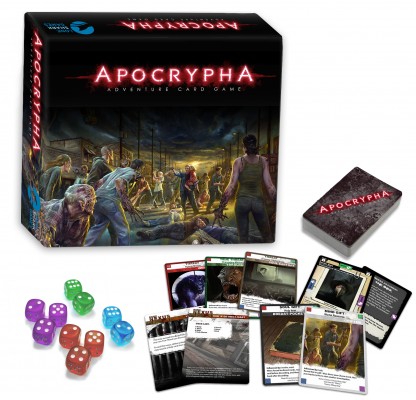 Mike Selinker is a major developer in the board game world.  His most recent large success is the Pathfinder Adventure Card Game system, but he’s had plenty other titles under his belt.  He will be coming out with a game in the Titan Series of gaming from Calliope.  Right now as President of Lone Shark Games he’s using Kickstarter to publish Apocrypha, a game reminiscent of the Adventure Card Game system.  I wanted to find out more, and got him to answer eight questions on it.

What is the setting of Apocrypha?

Apocrypha is set in the modern day, on the edge of the apocalypse. There are nine monstrous entities called the Novem, whose actions will bring about the end of the world. Unfortunately, people don’t really know all the monsters in the world exist. But you do! You’re a saint, a person with ties to the divine whether you want them or not. If you don’t stop the monsters’ plans, things will go very poorly indeed.

Betrayal at House on the Hill, which you helped design, has a B-horror movie feel. It looks like Apocrypha takes a more “serious” approach with the art and storyline. Why did you decide to move in that direction?

My horror games have a nice continuum: Apocrypha is serious and scary, Betrayal has a haunted house flavor, and Unspeakable Words is just ridiculous. This one is serious because we have a serious story to tell. But you will find some humor in it. I think we’ve got something people will want to immerse themselves into.

You also helped design the Pathfinder Adventure Card game which has some similarities to Apocrypha. What’s the greatest difference for you between creating a game for an established license and creating a game with your own setting?

Oh, I don’t create anything by myself. This setting was created with Rian Sand and Matt Forbeck and Mike Vaillancourt and my entire team of designers. And just because we don’t have to match someone else’s story bible doesn’t mean we don’t have one. All that said: As much as I like all the licensed stuff I’ve done, writing my own stuff is awesome. For example, today we learned that one of the Halt and Catch Fire protocols is the “Pentium F00F Bug.” If you don’t think we’re not giving the Golems in our game a “Foofbug,” you don’t know us very well.

How did you come up with the virtues and other stats used in this system to make it unique?

Lead developer Chad Brown and I wanted a system of cards that were grouped by your main skills, and then I came up with the idea of forcing all the stats to the outside of the card. Which meant that those names would be very short (Body, Mind, Soul, Rage) and could be in any order. When I figured out the positional impacts of different skills affecting different people, and that table position matters a ton, we knew we had something very cool.

Apocrypha can be played cooperatively or with a game master. How does the gameplay change between the two variations?

The way I look at it, if you heard a table of Apocrypha played without a gamemaster, it would sound like the Pathfinder Adventure Card Game. And if you heard a table of Apocrypha played with a GM, it would sound like an ordinary RPG, with everyone speaking for the characters and the GM playing all the NPCs. But inside the game, the big difference is that the GM has agency over the things that happen randomly in the card game. So instead of randomly figuring out where the Succubus is, the GM knows. Instead of randomly getting memory fragments, players will have them assigned by the GM. It’s a very different but highly compatible game style.

Most of the games Lone Shark has designed were published by other companies. Why decide to publish Apocrypha on your own?

We had lots of offers for our followup game to the Pathfinder ACG. And that told us something. We figured that if we weren’t going to publish this game, we probably would never do our own game. And now that we’ve decided to do it, we’ve got lots more coming. We have party games we’re doing with the musicians Kid Beyond and Paul & Storm, plus a Numenera game my friends Paul and Bo designed. Lots more coming from us.

Is there a larger challenge using Kickstarter with a game of this kind of scope compared to something like The Maze of Games?

Oh man. It’s been really different. With The Maze of Games, people were really interested in us doing a slow reveal of something we hadn’t finished yet. With a board game, a whole lot of people were upset that we didn’t have final rules and gameplay session videos online on day one. But we did what we could to get them what they wanted, and now things are pretty great with that crowd. We listened, and folks appreciated it.

The number of chapters included seems to be impressive already. Is there a possibility of more chapters and other additions in the future?

I think we’re good for a while. We have a long way to go to get done with the nine Novem-based chapters and the bonus chapter called The Secrets of Candlepoint. The Candlepoint mission should be especially great since Pat Rothfuss is involved. He lives in a town called Stevens Point, and we both immediately hit on the idea of using Stevens Point as the basis for the town that the apocalypse starts to rumble in. With developer Gaby Weidling and story guy Matt Forbeck also from the region, we have a lot of people who have reasons to wreck the place. But in a nice way.

It sounds like a unique setting that is more than just a bunch of bumbling zombies.  Be sure to check out the Apocrypha Kickstarter page for more information.