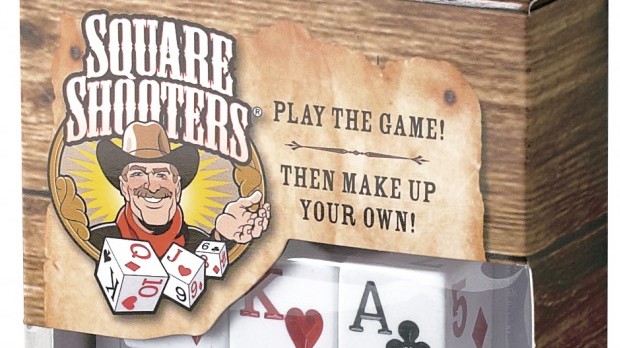 Sometimes inspiration comes from the strangest places.  I have seen many different decks of standard cards, some with irregular shapes, odd artwork, the card value in all four corners, a fifth suit, and even a deck with the suit displayed on the back of the cards.  However, when I heard about a deck of cards on dice, I thought it was a very unique concept.  Here are eight questions with Carmelyn Calvert, the designer of Square Shooters.

What are some of your favorite games?

That’s a hard question. I like to play almost any game. I love to play chess. What I love about playing games is the interaction with the other players. People reveal a lot about themself when they play games. I’ve often been surprised and at times shocked at the competitive nature of people. I’m really not that competitive. I don’t care if I win or lose. I just love to play games. I tend to make the competitive players mad as hell, because I can’t help laughing when they are losing and getting sooo mad about it!

How did you come up with the idea of putting a full deck of cards on a set of dice?

It really was a light-bulb moment. Late one night it just occurred to me that you could fit a deck of cards on nine dice if you included the jokers. 6×9=54. My next thought was, Why no one had ever done it?? I thought maybe you couldn’t place them strategically for it to be practical. My Dad taught me had to play poker when I was 5 years old so naturally I thought the lay-out of the dice had to allow a player to roll all 13 four of a kinds, all 40 straight flushes and every card had to be able to paired with the others to allow full houses.

How difficult was it to create the scheme for which card values to put on which dice?

The time involved was a couple of hours. I had to think like I was playing chess. ( If I put this card here then that card had to be on a different dice etc. I repeated this until all the cards were placed.) It’s really a stacked deck of cards permanently stacked in nine piles. If you did this with a deck of cards and only dealt each player a card from each stack, the odds of dealing a great poker hand or rummy hand are greatly increased.

It’s a poker-matching game.  For 60 years, game players have shown their love for poker-matching dice play with Yahtzee. When I started working with Heartland to publish the dice, we decided that we wanted to have a feature game instead of simply selling the dice, and we knew that we had an opportunity to create the most authentic poker-matching game yet!  In our game, players are assigned a poker hand by turning over a game card and they have three rolls of all the dice to a collect a match.  If they match the type of hand shown they can win, but they can press their luck to get an exact match of the example hand that’s on the card and double their score.  The game keeps score with chips–we designed the game to use cards and chips because it allows players to get creative with how they assign the tasks and keep score.

What other games have you played using these dice?

Beside the games listed on the web-site. I’ve designed a casino table game. Picture this: a green felt top, all 52 cards are layed out. Players have chips they bet on what cards they think are going to be rolled. Each player takes turns rolling the dice. The “Shooter” pays any player placing a winning chip on any card rolled and collects any losing bets. If the jokers are rolled red or black the players bets are safe on the corresponding color. For instance black joker,  K of spades. The “Shooter” would not be allowed to collect the players chip. The players can leave their chips or place it on another card if they choose. The “Shooter” does not place bets when it’s his turn to roll.

What made you decide to go and produce this commercially?

Family and friends response to the game was overwhelmingly positive. The first sets of dice I made where painted blocks of wood. I can tell you they rolled the paint right off, because they played hours on end with those dice. I had the opportunity to meet Jonah White the CEO of Billy-Bob teeth. He lives locally and has successfully marketed his teeth world-wide. He helped me find a manufacturer and get started.

Can you give us more details on the design contest?

I’m very excited about the contest. I always envisioned people taking the dice and making up their own games. In fact right from the beginning people wrote in to the web-site telling us about various games they made up. So why not have a contest?!!  Heartland is offering a $2,000 cash prize along with a promise to publish the winning game!  Entries will be accepted from October 1 – October 25.  Information will be posted at www.thatshowirolldice.com and the contest will be run on our game design forum at forums.squareshooters.com.

Have you thought about designing any other games or systems?

Yes! I have other games, favorites of my grandchildren. When I first told them that I was going to produce Square Shooters they were actually disappointed that it wasn’t their favorite. We call it the Christmas game. Well maybe some day!?