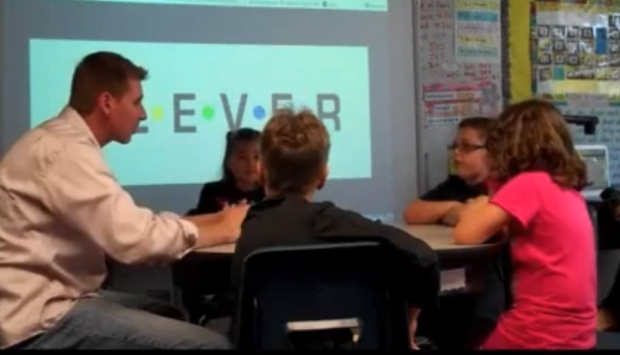 Recently we sat down with Jason Santa Maria, creator of the recently-funded Kickstarter-fueled card game, CLEVER.  The premise is simple, but the concept is far deeper than the simple artwork might suggest.  We had to find out more about the game, how it came to life, and how it works.   We got more than we bargained for as we also got to see how just how easy it was to learn.   Let’s dig into the Crazy Eight, but first – you must hear the CLEVER song that launched the Kickstarter.  Enjoy!

How sure were you of your decision when you decided to become a game designer?

I was pretty confident in my ability to design games when I finally made the decision to start a business and begin calling myself a “Game Designer”.

A couple of years ago I had entered a video game concept contest called “Unlock Xbox” held by Microsoft and Frito Lay.  My submission to that contest went on to become selected as one of the top 3 games, followed by receiving the most votes from the general public as to which game they most wanted to see published.  That experience certainly helped me realize that not only do I have a knack for designing fun games, but I really enjoy doing so.

My success with that contest coupled with the numerous times I heard- “This is great, why don’t you get this published?”- from friends and family after playing another one of my homemade games, also added  to my confidence level in pursuing game design in a professional capacity.

What’s weird for me to think about is, technically I’ve always been a game designer.  I’ve been creating games as early as 6 and 7 years old.  I think people can sometimes get wrapped up in what they “think” they should be doing as opposed to what they want or love to do.  I was certainly one of those people and I only wish I had not waited as long as I did, to take the proverbial leap.

How does it feel to not only be fully funded, but get over 150% of your goal?

Absolutely wonderful!  Having the project supported so well and by a significant number of fans makes me feel like I’ve created something worthwhile and special, that others will enjoy.  I just can’t wait to get it out to my backers and then out to the world!

How did you come up with the idea of the CLEVER deck?

I came up with CLEVER during a long car ride, driving from Los Angeles to San Diego.  I was actually thinking about how much I’d love to do a video game, but lacked the necessary technical skills to do it alone.  From there I decided to start thinking of a game that I could put together on my own.  My thinking turned to what type of game would be one of the easiest to fabricate, and a card game seemed to be the answer.

Once I settled on a card game, I turned my thoughts toward my earliest recollections of card games and cards in general.  Two things came to mind- Poker Cards and Flash Cards.  The first flash card to come into my mind was the “A is for Apple” card I think we’re all familiar with.  The first Poker card I pictured was the Ace of Spades.  I then combined the two cards into one and thought- “What if instead of matching my ‘A of apples’ to the other three ‘A of apples’ in the deck, I matched it to a banana card?  That would be kind of cool!”

That was really the genesis of CLEVER.  By the time I pulled into my driveway, I had all the elements of the game that I wanted to do.  It then became a matter of fleshing it out and spending countless hours ensuring the game was balanced and allowed players to make all the different relations seamlessly.

One of Jason’s earliest memories of gaming is one we all share.  In this video with fellow board game enthusiasts, Gamerati, Jason talks about this early inspiration and how it lead to game design, and ultimately CLEVER.

Was it difficult to come up with the objects that show up on the cards?

My short answer is- Yes!    The challenge with designing CLEVER wasn’t so much about what to put on the cards, but more of what had to be on the cards, if that makes sense.  For instance- I knew early on that I wanted each card to be like a flash card, where whatever letter was being used on the card would also be the first letter of the name of the object on that card; just like “A is for Apple”.  I also knew that I wanted to have the color on each card be as closely related to the object on the card as possible. Again, if I’m putting an apple on the card then that card should be red.  Lastly I wanted each card to be instantly recognizable and easily classified based on the picture alone.  My thought was that people should be able to state what the object on the card is without it being labeled.

Knowing these things, I then had to take the game mechanics into account.  If I was also going to be creating sequences with these cards, I couldn’t have 3 cards of the same color directly next to each other.  For example- If A, B, C were all red, then that wouldn’t be any fun because you’d be creating a sequence at the same time as creating a color match.  The same rule applied for categories. Before I knew it, I was all kinds of limited on what could appear on each card.

As I’m sure you can imagine getting all of the cards to fit within the rules I had laid out for them and “play nice” with one another wasn’t exactly easy.  Still, I’m very happy with the final result and proud to say that I stuck to my guns when determining which objects should appear on the cards.

Ask me again about this, when I try to localize the game. Even just applying British English objects – such as a “Lorry” instead of a “Truck” – much less objects in other languages, it will be almost like designing the game anew, from scratch.

How many games come with the CLEVER deck out of the box?

CLEVER currently has instructions for two games right out of the box.  However I’m busily working on getting an additional game or two into the instructions before I go to print. (There are 4 total games that I’ve already worked out without including variations.)

With that, the CLEVER deck was designed with a traditional deck of cards in mind and as such there are a myriad of games that can be played with it.  As much fun as I might have sitting around and continually coming up with new games to be played with CLEVER, I thought it would be even more fun to let CLEVER players come up with their own games and post them to what I’m calling the “Clever Community”.  The “Clever Community” will be a place on the CLEVER website (www.clevercardgame.com) where people can go to find new and unique games CLEVER players have come up with, as well as present their own.

Once I publish CLEVER and get it out to the fans, I feel like it will then become their game.  I can’t wait to see some of the clever games people are able to create using the deck!

How do you plan on supporting the CLEVER deck in the future?

Some of the most immediate things I’ll be doing to support CLEVER will revolve around providing instructions for new and different games via the website.  Instructional videos, downloadable PDFs and advanced play variations are all things I have in mind to implement.  I’ll also be looking at translating some of these same instructions into different languages so that people from around the world can enjoy the game.

I was blessed to garner all kinds of helpful and valuable feedback during my Kickstarter campaign.  I would certainly like this to carry over into the “Clever Community,” as well as continue receiving direct feedback on the game from players themselves.  As I believe CLEVER will become a game of the people that play it, I would like to honor that by continually listening to and implementing any plausible feedback that might help them further enjoy the game.

It might be worth noting that CLEVER is currently in its first edition and or base form.  Future iterations of CLEVER are certainly on the horizon, including new styles of the original, and themes such as- CLEVER Science, Geography and History to name few.

Have you heard of the Decktet, and what differentiates the CLEVER deck from the Decktet?

I hadn’t heard of Decktet until being asked about it today. Unfortunately I don’t know enough about it in order to speak intelligently to the differences between the two games, but from a quick scan online, it looks like CLEVER is quite a bit simpler to pick up and play. While CLEVER is family-friendly and suitable for adults, it really targets kids age 7 and up, although I’ve seen much younger kids quickly grasp and have a blast with CLEVER. You primarily play CLEVER by  finding different relations between the cards- these relations are based on categorical classification (land animals, vehicles), color matching (red objects, yellow objects), sequence construction (1-2-3, A-B-C), spelling (C-A-T, K-I-N), and even mathematics (1+2=3, 2*3=6). Thus, CLEVER adapts and appeals readily to a wide range of players at diverse stages of cognitive development.

It’s one thing to say that CLEVER is easy for kids to pick up, but it’s another thing to show that in motion.  In this video we see Jason sitting down with Bella and Antonio for a quick game.  I’m certain you’ll be as surprised as I was at just how fast they picked up the mechanics.  Let’s wave hi to Bella and Antonio!

Do you have any other projects that you will be starting after you have completed the CLEVER deck?

If by “other projects” you mean games that aren’t directly related to CLEVER, then again the short answer is- yes.  However, given the scope of what I’d like to do with CLEVER and future iterations of it, I don’t know that any of these projects will be happening very soon.  I have big plans for CLEVER and I’d like to continue to support it and see it do as well as possible before moving on to another project.  Given the educational value CLEVER has tied to it, I feel obligated to ensure the game’s continued success and get it out to audience that would most benefit from and enjoy it.

Now that some of my friends and family have seen CLEVER become successful on Kickstarter, they’re already asking about other games they know I’ve created and when they can expect them to be published.  I really enjoy their enthusiasm and I do look forward to the day I’ll be able to bring some of my other creations to fruition.

There’s just 24 hours left before the Kickstart ends, so there is still a chance to get in on the ground floor of this awesome game. There is still time to see if we can push CLEVER to their 15k stretch goal, but the fact that the 12k stretch was a pledge to pay it forward to other Kickstarter developers is admirable to say the least.  Congratulations to Jason and his successful venture, and we look forward to getting our hands on the final set!