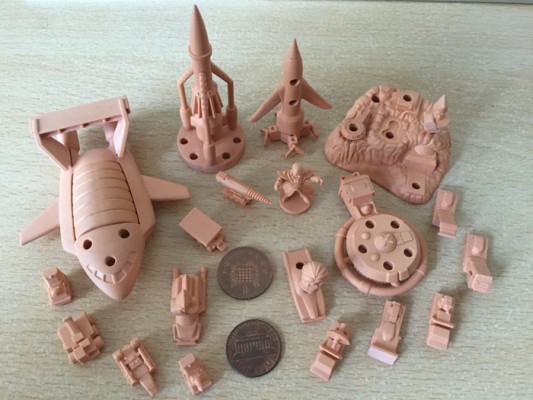 I admit, I wasn’t that interested in the Thunderbirds game posted on Kickstarter when I had first heard about it.  I don’t have the same nostalgia for the Thunderbirds that others have.  However, when I found out that it was being designed by Matt Leacock, I decided that I needed to take a look.  I was given the opportunity to ask eight questions to Matt about how he designs games and how he got involved with the Thunderbirds game.

I designed Pandemic to play with my wife. We enjoyed playing Knizia’s Lord of the Rings together and I liked the fact that, win or lose, there were no hard feelings after a game. Shortly after I decided to take a crack at designing my own cooperative game. I was also drawn to the challenge of designing an opponent for the players using only paper and cardboard.

What do you feel makes a great cooperative game?

They should also tell a good story. Good stories have ups and downs, modulating beats of hope and fear, that rise up to a climax and then go through some form of resolution at the end. I try to model my cooperative games after this structure.

Another critical component is a feeling of autonomy. Players should feel like they can contribute something unique to the game. That’s one reason you see so many cooperative games with role powers—they help give each player an individual identity.

How do you make a cooperative tough but fair for players?

Well, it’s easy enough to make a cooperative game difficult: present a challenge with long odds. The key, however, is to give the players the tools they need to overcome the challenges and ensure that whenever they lose, they blame themselves for making sub-optimal decisions (instead of blaming the game for handing defeat via a bad draw). Of course, it’s difficult to get this balance perfect (sometimes players will lose to extraordinarily bad luck) but if you offer the player enough autonomy and control, the players will forgive you and try again.

How did you get involved with the Thunderbirds board game?

Chris Birch from Modiphius reached out to me at Spiel in 2013 and pitched me the idea for a cooperative game based on Thunderbirds. I had never watched the show, but Chris was so enthusiastic—it was clear that he truly loved everything about Thunderbirds—that I told him I’d look into it. After watching several episodes at home, I immediately saw the appeal and how perfect it was for a cooperative game, so I signed up.

How does Thunderbirds differ from your other designs?

In Thunderbirds, you travel around the world averting terrible disasters, but you’re never really sure if you’ll be successful or not since the rescues are resolved using the roll of two dice. You can, however, increase your odds by assembling just the right characters, vehicles, and equipment. This, however, is time consuming and may have you neglecting your other objectives. So, a large part of the game is juggling how much risk you want to take for the various impending disasters against the time it takes to avert them. This is quite different from my other games where when you take an action, it just happens immediately. The game will also feature insanely cool models that I can’t wait to get my hands on.

Do you prefer working with a license or coming up with your own theme?

This has been a fun change of pace for me. The Thunderbirds theme is very rich but at the same time offers some constraints that can be a catalyst for creativity. For example, if I had designed the game from scratch, I don’t think I would have come up with a vehicle in the game that doesn’t move! (Thunderbird 5 stays put in Geo-stationary Orbit.) Working around the idiosyncrasies of the characters, episodes, and vehicles has resulted in a richer experience that I think both fans and people new to the show will enjoy.

Do you prefer to design cooperative games, or do do you hope to be known for something more competitive?

I’m very happy to be known for my cooperative games. That said, I do enjoy creating competitive games and expect to continue to design those as well.

When do you expect Thunderbirds to be released?

Chris Birch writes:
We will be releasing to retail in September, with backers receiving the game in August, then the various expansions will start being released from Christmas onwards.

If you are a fan of cooperative games, especially Pandemic, then be sure to check out the Thunderbirds Kickstarter.  There’s still plenty of time to get in on the action.