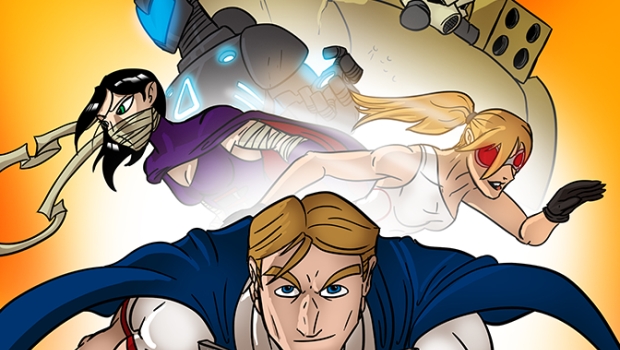 I remember seeing Sentinels of the Multiverse at GenCon 2011, but not stopping by because I was too busy with other appointments.  Since then Greater than Games has exploded as a company and have shipped several expansions for SotM and are coming out soon with a new original game, Galactic Strike Force.  I recently caught up with Christopher Badell of Greater than Games to ask him about how his company and their games.

How did Greater than Games form into a company?

It all started when my friend Adam and I had an idea for a game. A cooperative, comic-book themed card game. And then we made it, just for us to play. We showed it to our friend Paul, and he loved it so much that he talked us into making a company to make more games. And that’s how Adam became a full-time artist, I became a full-time game designer, and Paul became a full-time publisher. I might have left out a few years of backbreaking work in that description, but who wants to hear about those anyway?

What were some of your inspirations to create Sentinels of the Multiverse, a game based on super heroes?

Super heroes are awesome! But the best super hero stories are those in which a group of very different people come together and make a team, joining forces against overwhelming odds! I love cooperatives games and I don’t feel there are enough good co-op games out there, and that theme of a team of awesome characters teaming up against a terrible villain just seemed the perfect fit.

Why go with a cooperative game instead of a competitive one?

Super heroes are all about cooperation and working together. I have a hard time with super hero games in which you play two super heroes beating each other up. Boring! I want to work together as a team!

Was it hard to create new characters that didn’t seem to be carbon copies of other well known super heroes?

Creating Sentinels of the Multiverse was great for two big reasons: we got to make the game we’ve always wanted to play, and tell the stories we’ve always wanted to read. Making the heroes and villains and story-arcs of Sentinel Comics comes pretty naturally to me – this sort of storytelling is where I’m most comfortable. I’m just thrilled that people enjoy the stories as much as we enjoy making them!

The first time I had heard of Sentinels was from seeing your booth at GenCon. What were some of the challenges you have had as a small company getting more exposure?

We were pretty lucky. We made the game and brought it to Gen Con 2011 without any advance marketing or exposure, setting up in a tiny booth in the back of the hall. We all patted each other on the back for a job well done, making the game, creating all the parts, establishing a company, getting that game printed, and taking it to Gen Con. We had no expectations for how well the game might do – just that we’d do our best to support it. By the end of the first day, we had lines of people waiting to play Sentinels, and got a TON of positive media attention. So, just having a good game and getting out there to support it ended up being the best marketing we could have!

Did you ever tinker with the idea of making a deck-building game instead of giving each character its own starting deck?

With Sentinels of the Multiverse? No. Each hero needed to feel like THAT hero, and if you’re adding things to their decks, well, that can still feel cool and that’s certainly a good concept for a game, but that doesn’t allow us to do the type of storytelling we’re doing here. In order to create a particular feel and playstyle for each hero and communicate their personality via gameplay, I create the contents of those decks very carefully, both thematically and mechanically.

You’ve had several successful Kickstarter campaign. How much has Kickstarter helped to expand?

Kickstarter allowed us to make our first expansion, Rook City, months (if not years) before we would have otherwise. Since then, it’s helped us launch other expansions, as well as to create an entirely new game: Galactic Strike Force. We love our Kickstarter backers and always make our campaigns focused on giving back to those who support us.

Galactic Strike Force is your latest project, and it looks completely different from SotM. What can you tell us about GSF?

Galactic Strike Force is a cooperative space combat game in which you control a ship and its crew, working together with your teammates and their ships. You fly through the galaxy, upgrade your ships, and go head-to-head in strategic combat against opposition forces which are spreading throughout the galaxy and wreaking havoc.

It’s a very different game than Sentinels of the Multiverse, even through it’s still a cooperative card-based game. Players do not have individual turns, but rather, act simultaneously across phases. The opposition forces also react differently, taking advantage of mistakes the players make by attacking unguarded sectors and going after less prepared Strike Force ships. It’s a great experience, and one that I’m excited to share with fans of cooperative games!

If you like what you have seen, be sure to check out the Sentinels Tactics Kickstarter running now.