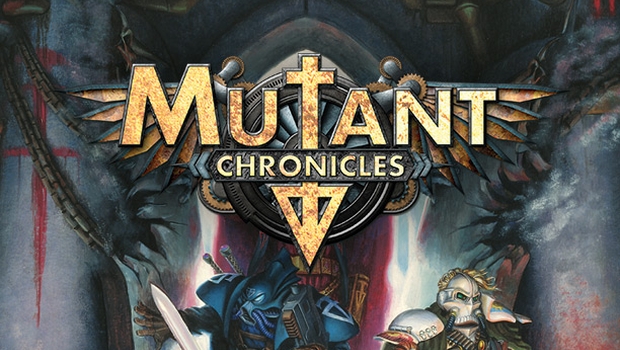 Can you give me a little background about you and Modiphius?

I started playing games with Steve Jackson’s Ogre and, course, D&D when I was a kid and played in my brothers group. I upgraded to Star Frontiers ‘s, war-games and AD&D in my teens. I ended up in London working in the music business in London and started designing games with a friend Stuart Newman who I later wrote the Starblazer Adventures epic FATE space opera game with. Modiphius came about during my years working in video games merchandising and I realised I wanted to get in to the tabletop industry properly. It starter life as a fun evening project, releasing the Achtung! Cthulhu adventures and then when we launched the Kickstarter for Achtung! Cthulhu we became a business almost over night!

What does your current Kickstarter project entail?

The Mutant Chronicles Kickstarter is a re-boot of the 90’s RPG that was one of the biggest names in gaming. It finished at £151,000 and succeed in funding 17 books and accessories and merchandise. We hired Jay Little the lead designer on Star Wars Edge of Empire to complete the game development and ensure we ended up with a cutting edge new RPG to bring back this awesome world.

Why were you interested in the Mutant Chronicles property?

Mutant Chronicles was everywhere in the 90’s from the Doom Trooper card game to boardgames to the Warzone miniatures to comics, film and much more. It was a major gaming brand that had a lot of love from it’s fans and so I knew we would have a lot of support, even 10 years on. There are people who’ve been playing the same old RPG from the 90’s all this time and the success has proved that the brand has a lot of life in it.

How difficult was it to get the rights to Mutant Chronicles?

We had been talking to the owners of the brand for a while but had to do several proposals to show what we planned to do, the business terms etc. It helped that we were having a lot of success with Achtung! Cthulhu and they could see we knew what we were doing I think.

It takes the whole techno-fantasy idea and wraps it with a very familiar world – the universe feels very much like what we’re used, the styling is a diesel punk / 50’s vibe there’s the ever present corporations grinding people down. Whilst we’ve got epic invasions and aliens from another universe, magic and mutants, there’s still this solid grounding in Earth culture that I think makes it much easy for fans to immerse themselves in the world.

What differences will there be between your version of Mutant Chronicles and the previous one?

The rules will be more cinematic, less crunchy, designed to tell epic stories, whilst the game will introduce spaceships for the first time, as well as lots of other rules or systems that were missed in the first combat heavy version of the game. The setting will introduce more parts of the world never seen before – fuller descriptions of the worlds, images of life outside the battlefields, space travel and more. We’ve filled in a lot of gaps in the storyline and plotted the events that will carry us through the original story and beyond.

Do you plan on making any further Mutant Chronicles non-RPG spin-offs in the future?

We’re already producing a range of merchandise tied such as t-shirts and bags but there’s no plans to extend beyond that yet. Who knows though!

Do you have any other projects you’d like us to be aware of?

Yes we’re currently in playtesting on the DUST Adventures RPG which is the official RPG of Paolo Parente’s DUST universe – with the big relaunch of DUST Tactics this year we’re excited to be bringing this awesome game to life for role-players.

If you are interested in finding out more about Mutant Chronicles, check out http://www.modiphius.com/mutant-chronicles.html