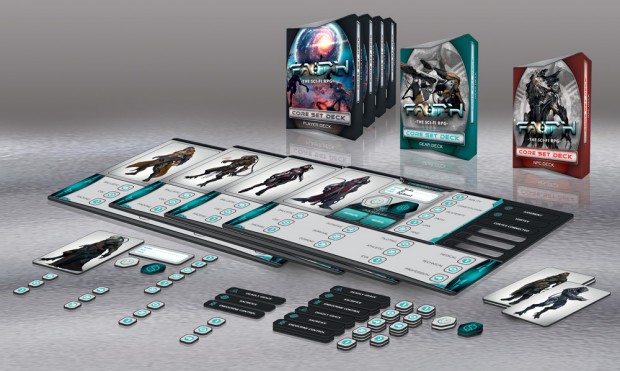 Tabletop RPGs can intimidating to those who have never played before.  The stereotype of several guys in the basement rolling dice and speaking in strange accents has been hard to break.  While that stereotype has been chipped at, more games are taking a hybrid approach of a board game with RPG element, not unlike many video games with character stats and progression.  Burning Games has their game FAITH on Kickstarter now, and I asked the designer eight questions to see what sets it apart from other games.

Who are you and what is your involvement with Faith?

We are four friends from Spain that have been playing games together since we were kids. We started developing Faith a little over a year ago, and we are now trying to publish it thanks to the support we got in February from a British University.

Why is your RPG called Faith?

One of the most important elements of the setting of Faith are its Gods. They represent the moral paths that characters can follow to get their support and be granted divine powers that can break the laws of physics.

How did you come up with the setting?

It has been a long process that involved reading a lot of books and other reference materials. Additionally, we have counted with the advice of an astrophysicist and an aerospace engineer to introduce the wormholes and many aspects of the technologies of the game.

You claim that Faith is a PnP RPG without paper. How do you achieve this?

Traditional character sheets are replaced with character boards that ease the character creation and allow to start playing almost straight away. Additionally, NPCs and gear come in cards that have illustrations and all the relevant information needed to use them. However, if you wouldn’t change your pen and paper for anything you can still print out the character sheet from our website and fill it out.

What role does the GM have within Faith?

The GM plays the traditional role of narrator of the story. He is in charge of controlling the setting and all the NPCs, and instead of asking for checks he can confront the players directly to create tense and dramatic situations, representing accidents or bad luck. The GM acts as a moderator to create interesting situations for the players so they do not succeed at everything all the time.

How do you plan on expanding Faith?

We have several expansions in mind, including more playable species, additional gear and npc designs and cards, spaceships, additional modules with campaigns and settings… If the game is successful, we have plans to continue supporting it for many years to come.

What other features of Faith differ from other RPGs?

The alien species are unique to our setting, and the mechanics of the game use cards in a way that allows players to manage their resources, while keeping the gameplay streamlined and focused on the narrative.

When do you plan on releasing Faith if the Kickstarter is backed?

We have assigned two months after the end of the campaign to finish the development taking into account the feedback from our backers and finalize all the art. After that we will send the game to production and fulfillment is scheduled to begin in October this year.