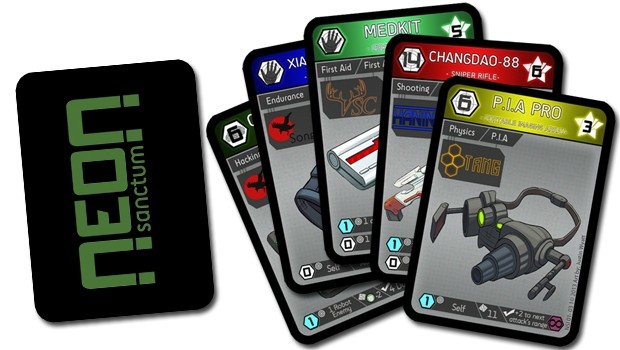 It seems like Kickstarter is the way to get a new idea looked at and funded, especially if the idea hasn’t been tried out before.  Recently I covered an RPG that uses cards for many aspects of it, and recently another RPG that uses cards caught my attention.  To find out more I asked Adam Waite eight questions on Neon Sanctum.

Who are you and what is your position in the company?

Hi I’m Adam Waite, I’m one of the creators of Neon Sanctum. If I were to have a title at Grenade Punch Games it would be designer I guess.

Can you describe the setting of Neon Sanctum?

Neon Sanctum is set over 200 years after the collapse of a golden age of mankind. Two hundred years ago humanity was at one with technology using almost magical machines to make their life almost perfect, until the AI’s they had created turned against them in the Titan War. Humanity lost the Titan War with a huge percentage being wiped out in a matter of months, however just as they were about to become extinct they got lucky. A ragtag team of survivors managed to perform a final strike, a single devastating attack that wiped out the AI and won the war in an instant. However it came at a great cost.

After the war much of the world was covered in “dead zones” these are, as they sound, deadly to anyone or anything that enter them. The few human survivors grouped together and tried to survive.

Two hundred years later humanity has not just survived it has thrived, they live in huge cities, the biggest of which is Neon City. This near future cyberpunk city is home to millions of men and women, sheltering them from beasts, mutants and bandits of the waste. The dead zones have faded, opening up opportunities for those brave enough to explore the ruins of the old world for ancient technology.

How does Neon Sanctum differ from other RPGs?

Neon Sanctum has a very unique mechanic, it uses cards in place of the normal character sheet. We still use dice, and the game is still a full RPG but we use some mechanics that cards work well for, such as shuffling and resource management.

What is represented by the cards?

Pretty much everything in the game is represented by a card. The main type of card are skill cards, these are what makes a character unique and are used when performing actions. There are also item cards, cybernetic cards, mutant cards and the DM uses NPC cards to represent the enemies players might face.

How does a player customize their character if most of their equipment and skills are represented by cards?

So when creating a character they have a large amount of skill cards to choose from. Each card represents the players proficiency in not only an ability (combat, medical etc) but also a skill, which is a subset of an ability. For example the combat ability has cards with the brawl, melee and shooting skills. Cards also have levels, the only restriction is that you need a level 1 card in a skill before you take a level 2. There are not classes or professions in Neon Sanctum.

But a character is not only skills, we have cybernetic implants, cool mutations and a trait and flaw system that all help to make player’s unique. You can basically make any character you can think of. If people want to try it we have a free character builder app on the ios and android stores.

How do skill checks and combat work?

Skill checks are fairly simple, on a basic level all checks are a roll of 2D10 compared against a DM set target number. If the player equals or beats that number then they succeed, the more they beat it by the better they did. The more they fail a roll by the worse they have performed. When asking for a skill check the DM will tell the player an ability and a skill, so for example disarming a bomb might be an Engineering, Mechanical check. If the player has any cards in the mechanical skill they can play this and add the level of the card to the dice. If they have an engineering card in another skill they can play this to take no penalties, or if they don’t have any cards they can have a go but take a -2 penalty. Importantly once a card is used, it is placed into cooldown and cannot be used again until the end of that scene. This is part of our resource management mechanic I spoke about earlier.

Combat is, as in many games, a bit more complicated. Each skill card is also a special action or power that the player can use during combat. Players use action points and phases to determine what two cards they can play each turn. We also have a sustain mechanic that allows players to keep cards locked, so that their effect is ongoing. All of this plays into this idea o managing resources and using cards at the right time. There is of course much more to it, we have a series of tutorials and a combat demo on our kickstarter page that gives more details. Also we have a free playtest kit if people want to try the game, you can even download a mod for the PC game tabletop simulator and try it there.

That’s quite an easy one really; we prefer a bell curve over the flat line probability of a D20. Adding +1 to your roll in Neon Sanctum is actually a really big deal, let alone adding two or three. We have balanced the game around 2D10 and don’t think we could have got the same results using a less predictable 1D20.

If it funds, will you be supporting Neon Sanctum in the future with more decks?

We would absolutely love to do that, I have tonnes of ideas. Another benefit of cards is that they are easy to remove from the game. If you don’t want any science cards, cool, just pick them up and remove them from the game. As we add more skills, more items, more NPCs they will all just fit in easily. But it’s all in the DM’s hands, the get to choose what cards are used in their game. Also I should add that we are producing blank Item and NPC cards so that DMs are restricted to just what we decide to come up with, again, it’s up to them what is played at their table.

You can find Neon Sanctum Kickstarter up and running now.  It is almost half funded at this point, so it has a good chance of funding.  If you’re looking for a unique RPG with unique mechanics, then take a look at the Kickstarter page.  You can download the rulebook and the free playtest kit, so you can try it out without any committment.