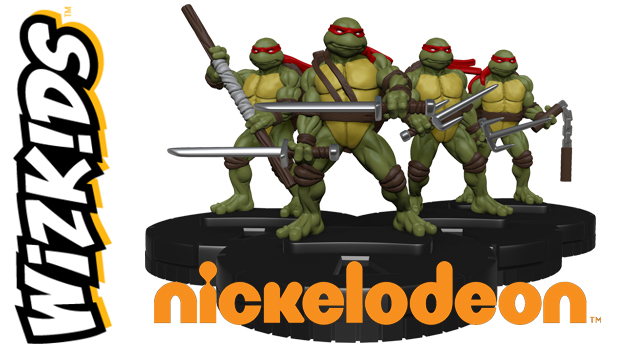 Now that they have mastered the art of miniature supply chains and dice manufacturing, WizKids Games is partnering up with Nickelodeon to introduce the Teenage Mutant Ninja Turtles to both Dice Masters and HeroClix game systems. HeroClix has a long history of including various intellectual properties that allow players to play out their multi-universe, cross platform battles. Dice Masters had a bumpy start last year with the initial release of Avengers vs. X-Men, but now WizKids has hit their stride with Uncanny X-men, the D and D themed Battle for Faerûn and the Yu-Gi-Oh! set. Now that the TMNT license has been added, I cannot wait to see Shredder go up against Captain America.

At Origins Game Fair today, WizKids announced a partnership with Nickelodeon, the number-one entertainment brand for kids, to produce multiple tabletop games based on the Teenage Mutant Ninja Turtles franchise. The first two games developed under this partnership will be a special series of TMNT HeroClix™ figures, and a TMNT Dice Masters™ game, both set for release later this year.

WizKids has seen great successes in its HeroClix collectible figure-battling and Dice Masters Dice Building™ products, and is very excited to bring fan-favorite Teenage Mutant Ninja Turtles characters, spanning all iterations of the comics from classic to present day as well as the classic cartoon and current hit CG-animated series on Nickelodeon, to both games.

“The Teenage Mutant Ninja Turtles are classic and beloved characters, and we can’t wait to see them integrated into WizKids’ tabletop games,” said Manuel Torres, Senior Vice President, Global Toys and Publishing, Nickelodeon. “We are as excited as our fans are to see Leonardo, Michelangelo, Raphael, Donatello, Shredder and more come to life in HeroClix and Dice Masters.”

For more information, you can see the original press release here.

In what I am sure is not the last post coming out of the Origins Game Fair, this is certainly an exciting addition to the already strong HeroClix and Dice Master product lines. I am still keeping my fingers crossed for a Firefly based Dice Masters.