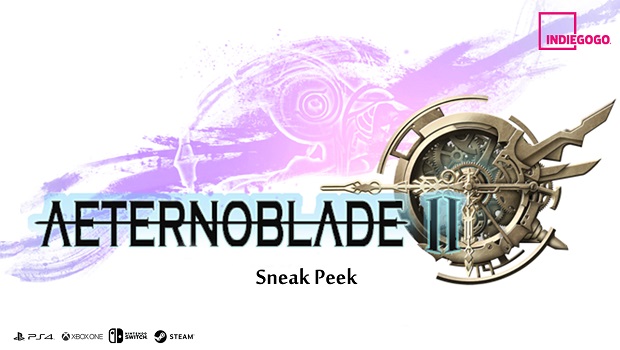 Corecell Technology, creators of AeternoBlade, recently announced plans to fund its sequel on Indiegogo. In addition to the campaign, the company has released a special sneak peek video which provides more details to the upcoming action-puzzle game.

After the events of AeternoBlade. Freyja has been living a peaceful life with her friends at the Ridgerode village. One day, the world becomes unstable, and there have been many significant changes to her timeline. On the other side of the world, two warriors, Bernard and Felix, head to Eternity Fortress according to the Chronos Kingdom’s Oracle in order to avert a foretold disaster. These three characters will work together in order to change the timeline back to its original order.

Like its predecessor, AeternoBlade II lets players use a time-manipulation ability to solve puzzles and perform different combos and attacks. In addition to the reverse technique, players can also stop time and move it forward using two additional weapons. In addition to Freya, you can play as newcomers Bernard and Felix, each with a different moveset and playstyle.

The Indiegogo campaign for AeternoBlade II will run until June 17 with a goal of $30,000, and includes tiers that grant a digital version of the game ($25) as well as a physical version ($80). Stretch goals have also been included for handheld versions of the game. If funded, AeternoBlade II will be released for PlayStation 4, Xbox One, Nintendo Switch, and PC. Stay tuned for more news here on Gaming Trend.