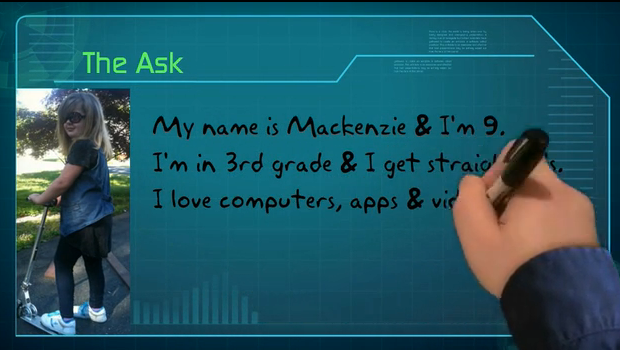 A few days ago, what sounded like a very encouraging Kickstarter showed up. You see, 9 year old aspiring game developer Mackenzie Wilson would like to be a game developer someday. Her older brothers reportedly teased her about this and said that girls can’t make games. So her mother helped her start a kickstarter to raise money to take her to ‘RPG Camp’, where she’ll be able to learn to code. It didn’t take long for a project like this to gain a good amount of publicity – you have to love a kid with such apparent initiative, and encouraging girls to get into the typically male-dominated field of programming is a big bonus. But now, with 1120 backers, $20871 pledged, and some questionable stretch goals being added, the Kickstarter is attracting some controversy – with Destructoid wondering if the whole thing is a pack of lies. Even if the young girl’s ambitions are laudable – good luck, Mackenzie! – there’s something foul about this project. Here’s why you may want to think twice before throwing your money behind this one.

The first question that comes to mind is, as great as it may be to get a child involved with programming early… does she really need the money? I mean, you’d think so, right? That’s the whole point of asking people to give you money in order to do something – because you don’t have the money to do it yourself. While I have no doubt that Mackenzie’s lacking in some funds, I’m not so sure about her mother, Susan Wilson. And who is Susan Wilson? Courtesy of Destructoid:

She’s the founder and CEO of The Judgment Group, a company that focuses on debt collection. She was featured on CNN Money as part of their list of The Most Powerful Women Entrepreneurs.

In other words, the money being asked for here? It’s not exactly going to a down-on-her-luck child, or even an average one. When you’re getting your picture taken with Warren Buffett and CNN Money is talking about how your debt collection company has made you one of the most powerful women entrepeneurs, I’m pretty sure you’re going to be able to afford sending your child to a programming camp without outside assistance. Granted, if you can manipulate people into covering the bill for you, I suppose that’s one way to cut costs and keep yourself from being harassed by a debt collection agency. Still, the whole thing starts to come across as rather foul.[singlepic id=11350 w=320 h=240 float=right]

Now, that’s not to say a 9 year old from a good family shouldn’t be allowed to have a Kickstarter. Granted, it seems like a lot of pressure for a kid to take on, and I can’t imagine being 9 years old and having a thousand people waiting to play the RPG I’m hoping to make once I learn the fundamentals of coding, project building, and more. If Mackenzie herself was showing that much initiative, well, that would be fantastic. Nothing wrong with a very young, focused individual doing something productive, after all. The reality, however, really seems as if it’s her mother running this show, complete with spamming twitter feeds for Women’s Groups and the Ellen Degeneres show to try and drum up more and more funding. Once again, this Kickstarter is clearing 20k as of this writing, complete with a 10k stretch goal. We’re no longer talking about helping a kid learn to code anymore.

Oh, and that 10k stretch goal? Straight from the Kickstarter itself:

ROCK STAR REWARD LEVEL: At this level, you get everything from the previous levels plus a personal apology from her brothers and the satisfaction of knowing that you’ve not only started a career, you’ve also helped to fund future courses in computer programming for her along with more (and better) games!

Where to begin? First off, am I the only one who finds “For ten thousand dollars my brothers will produce a personal apology for doubting me!” rather distasteful? I mean, it’s bad enough to build a fundraising effort around the reported sibling misogyny of your teenage sons. But selling apologies they write for 10k a pop? Talking about how donors will help ‘start a career’ for a 9 year old girl by throwing this much money into the pot? Look, I can appreciate a parent wanting to provide for their children’s education. But what’s going on here? This just seems exploitative, unnecessary, rotten, and cynical to the point of absurdity.[singlepic id=11351 w=320 h=240 float=left]

But perhaps worst of all is this lingering question: just how much of this entire Kickstarter, the project as a whole, really is Mackenzie’s own doing? On the surface, it’s hard to believe that a nine year old masterminded this project, along with the associated merchandizing (just $15 to get a can coozie with your game! $25 gets you a mousepad!)  How much of this effort is being undertaken by a smart young girl, and how much of it is the work of a parent who came up with an exploitative way to raise some money from a hopeful but unsuspecting public? With thousands of dollars being thrown at this project, these are valid questions that deserve an answer.

All of this doesn’t reflect on Mackenzie at all, of course. I wish her luck in her attempt to learn programming and make a game. I also wish that everyone else who was momentarily inspired and encouraged by this Kickstarter will think twice before throwing money at it. Really, I hope the people who have pledged money come to their senses and try to get their money back. While children like Mackenzie Wilson should be encouraged to pursue their goals, people like Susan Wilson damn well shouldn’t be.

For those of you who’d like to see the Kickstarter for this project, I bring you the embed: