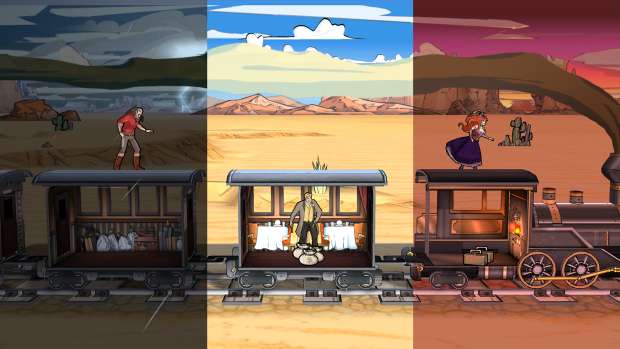 Colt Express has been a popular programming game with a great 3D train for the “board.”  Soon we won’t need to worry about putting all those train cars together, or even being in the same room as our friends.  Colt Express is coming to digital devices this November.

Asmodee Digital, an international publisher and distributor of digital games, in collaboration with Frima Studios, a leader in the entertainment and innovation industry, today announced the upcoming release of Colt Express for iOS, Android and PC. Colt Express is an online, multiplayer adaptation of the Spiel des Jahres and Ace d’Or award-winning board game which has sold hundreds of thousands of copies worldwide, and allows players to impersonate train-robbing bandits in the harrowing setting of the iconic American wild west.

Colt Express transports players into a lawless universe inspired by the board game. The game offers six original bandit characters fighting through a perilous journey filled with unpredictable quests of gun slinging, bullet dodging and train robbing. Players are challenged to develop ingenious tactics and schemes to successfully plunder trains filled with wealthy travelers and defeat online competitors from around the world in a real-time mission to become the wild west’s most notorious bandit.

“This is more than just an adaptation of the board game, it is a genuine revision of the physical version of the game,” said Remi Hanesse, product manager at Asmodee Digital. “We have crafted an imaginative and expansive world where players experience fast-paced, challenging gameplay, fueled by a riveting storyline which sparks competition and festivity among friends.”

Each of the six original bandit characters featured in Colt Express have their own custom objectives, skills, personalities and life stories. These distinct skills and personalities play a key part in the strategy of the game. For example, a character with hypnotic charm will be able to take control of an opponent at a crucial moment while a character with superhuman strength will be able to detach train cars when needed. The characters’ stories are told in exclusive graphic novel chapters which can be unlocked as players progress through the game.

Colt Express’ new story mode creates breathtaking adventure captured in 30 chapters loaded with challenges, twists and exclusive unlockable content. Centered around the six characters of the game, the story mode not only reveals the rich histories of the characters, but also opens up new gameplay mechanics, items, environments, skins and game mode variants. These variants change the way the game is played and add new depth to the game and how the stories of the characters unfold.

Playable in single player mode or through a worldwide online multiplayer leaderboard, the digital version of Colt Express is playable anywhere, anytime and allows for interactive real-time gameplay with friends. The game even allows for the creation of a “friends list” which players can use to easily organize playing with their friends. Colt Express also hosts an online global community which includes a leaderboard that tracks the game’s best players, which is updated in real-time.

I have been happy with most of the digital board game implementations I’ve tried.  I have no doubts that Colt Express will continue that tradition.