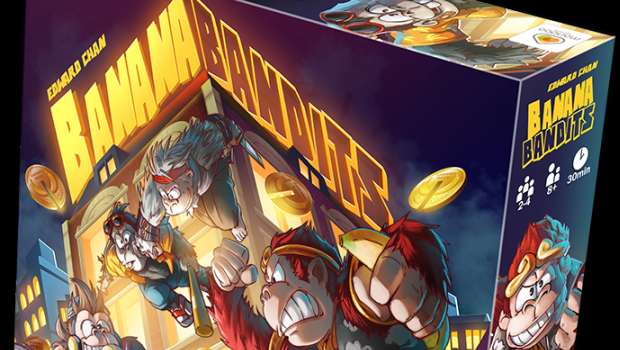 Most of the time we think about board games horizontally.  We lay out the board, deal cards, and put pieces on the board where applicable.  However, you don’t hear about too many games going vertical.  However, monkeys like to climb up and down, so making a board that goes up and down makes sense for the upcoming game published by CMON, Banana Bandits.

CMON Limited, Mandoo Games, and Capstone HK Ltd are pleased to announce they have entered into a licensing agreement for the exclusive, worldwide, English language rights to the upcoming game Banana Bandits. This fun, tactile, fast-paced game of ape action is sure to be a great addition to everyone’s collection and draw an eye or two thanks to its unique, 3D tower.

In Banana Bandits, players are vying to become the new leader of the Banana Bandits gang, a group of highly-trained, banana-loving, Gorilla Bandits. To do so, players will literally climb their way to the top of a unique, 3D cardboard tower, fighting with and stealing from other hopeful Bandits. Once a player has stolen enough Gorilla Coins and converted them into 3 Golden Banana Coins, they instantly become the new gang leader and win the game. To steal those coveted Gorilla Coins, the Bandits must attack each other using an intuitive dice system and various cards that will add bonuses during the fight. Each game is fast-paced, lasting around 30 minutes.

Kevin Kichan Kim, owner of Mandoo Games, says, “We’re so happy to work with CMON. We’re fans of their amazing projects and are excited to join in on the journey to bring Banana Bandits to the English speaking market.” David Preti, Creative Director of CMON, says “We’re excited to work with Mandoo Games to bring Banana Bandits to gamers’ tables. It offers a unique experience that is easy to pick up and has a fun presence on the table, like the recently released Potion Explosion. It’s perfect for the ever-expanding family of CMON board games.”

While I’m curious about the age range given the subject manner, I’m glad to see CMON expanding into even further areas besides miniatures and card games.  We’ll give you details as we find out more.