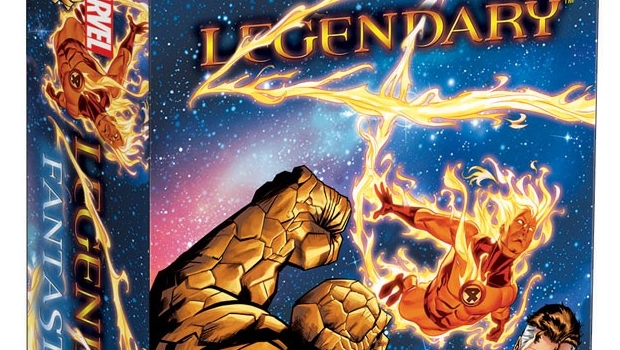 Face front, true believers! The fine folks at Upper Deck are bringing the first family of the four-color page straight to your tabletop with THE FANTASTIC FOUR expansion to their Marvel Comics deck-building game, LEGENDARY.

The Fantastic Four expansion set will now allow gamers to play with 950 cards and some amazing new art. All the art for the heroes was done by renowned artist Alé Garza. Joining The Fantastic Four in their quest to become “Legendary” is the Silver Surfer. They will certainly need his help as the team does battle with new Masterminds to the set; Mole Man and Galactus.

“The Fantastic Four are such important characters to the Marvel Universe, we felt they deserved a set of their own for Legendary™,” said Jason Brenner, Upper Deck’s entertainment brand manager. “We wanted to do the fans a service by making a character like Silver Surfer a playable hero while adding some new mechanics that speak directly to the team dynamic in The Fantastic Four. The end result will be a lot of fun not only for fans of the game, but new players as well.”

A paltry $19.99 at your friendly neighborhood gaming store is all that stands between you and the opportunity to team up with THE FANTASTIC FOUR and The Silver Surfer against Galactus and all the other Jack Kirby/Stan Lee baddies. Excelsior!