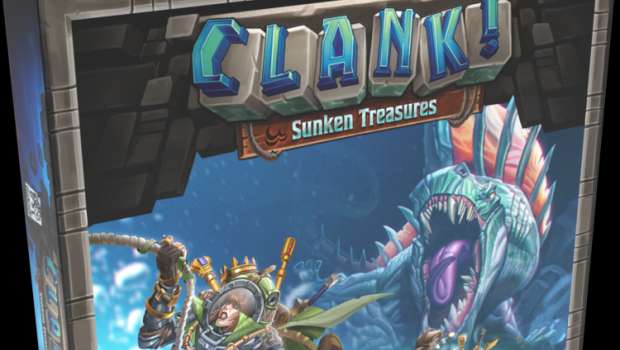 Clank! has been a very popular game for Renegade Game Studios.  They sold out of their first printing and their second printing has been completely shipped to stores with a third one on the way.  If you have a copy of Clank! and want to get even more out of it, then you want to see the new depths they are going to with the expansion that they have just announced, Clank! Sunken Treasures.

Renegade Game Studios™, the premier publisher of original games and Dire Wolf Digital, a leading digital strategy game company, to release the first expansion to Clank! A Deck-Building Adventure. The expansion will feature an underwater setting and will be titled Clank: Sunken Treasures.

Clank! Sunken Treasures is an expansion for Clank! A Deck Building Adventure. Players will explore two partially flooded maps with new Dungeon Deck cards, a new persistent monster to defeat, new environmental challenges, and more as they venture in the watery depths!

The challenge to prove your thieving skills has moved to new environments. You’d better know how to swim, as several rooms you’ll face have been completely flooded with water. Plus, of course, there’s always an angry dragon to avoid…

“Clank has been incredibly well received and fans are ready for more,” says Renegade President Scott Gaeta. “We are excited to offer bigger challenges, new dungeons, and some great surprises so quickly after the release. Dire Wolf has done a great job putting this expansion together and we can’t wait to show it off.”

Don’t make a sound as you go searching for this treasure when it’s released later this year.